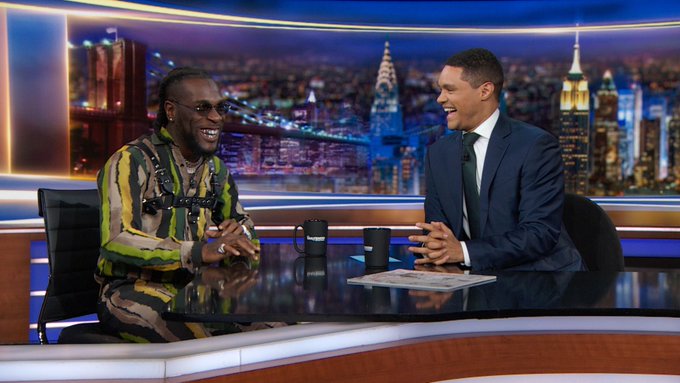 Nigerian superstar, Burna Boy had an interesting chat on Tuesday, 13th of July, with South African TV host, Trevor Noah on one of the most popular TV shows in both America and the world, The Daily Show.

This appearance is part of his promotional tour for his new album, African Giant which was released on the 26th of July, 2019 and his interview with Trevor Noah was laughter galore throughout the interview.

The afro-fusion artiste, during this interview, talked about his Coachella experience and why he thinks such an act should never be repeated or experienced by another African artiste whose identity gets hidden behind the names of other Western stars who are presumed to be bigger than them.

Speaking about the experience and how it went down, Burna said;

I was on a toilet seat and my mom called me to say you're doing Coachella and I was like, yeah, that's nice. So, I get off and go on the gram and then I see the thing and then I've seen all the names and then I'm looking for my name but I can't find my name... I literally can't find my name. So I'm like am I really performing ... what's going on, but (my mom) was like it's there... They had to circle it for me... so basically that has never happened to me before, I'm used to being The African Giant.

Speaking about why he reacted the way he did, Burna said;

I'm not used to that, so I was like, what's this? I don't like this, No. so basically I expressed myself and told them. and it's just for that, it's for the fact that everyone that's coming after me shouldn't have to go through that ... it should be the same with like the Latin artistes and all the international people that were there, you know.

In responding to his narration and making light of the situation, Trevor Noah in his usual comic approach told Burna that his response was typical of a Nigerian as humility and Nigerians don't mix.

Burna Boy at the end of the interview performed a medley of two of the dopest soundtracks from his body of works; Ye and Anybody.

watch till the end, it's laughter all through ??? #AfricanGiant #afrobeats #thedailyshow #Notjustok