Ghanaian dancehall singer, Shatta Wale has expressed his thanks to JAY-Z and Beyonce after he was nominated this year for the 2021 MTV VMAs.

Ghanaian dancehall singer, Shatta Wale has expressed his thanks to JAY-Z and Beyonce after he was nominated this year for the 2021 MTV VMAs. The singer shared this message via his Twitter page on Monday, the 13th of September 2021. 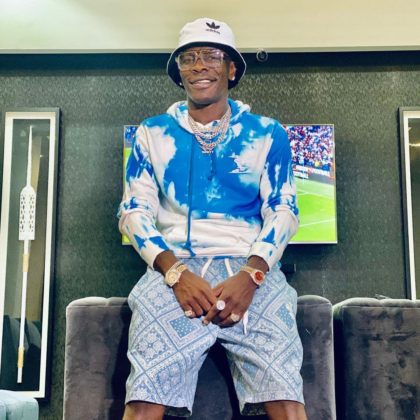 Shatta Wale's collaboration with Beyonce on the Lion King album, Already was nominated in the Best Art Direction category at the MTV Video Music Awards. The eventual winner of the category turned out to be Saweetie and Doja Cat's collaboration, Best Friend. Other nominees in this category include Lil Nas X' Montero, Ed Sheeran's Bad Habits, Lady Gaga's 911, and Taylor Swift's Willow.

Although he did not win at this year's MTV VMAs, Shatta Wale still expressed his gratefulness for the opportunity and thanked Beyonce & JAY-Z specially. He wrote;

God bless @Beyonce and Jay z moreeeee for me❤️❤️ ...wow!! What an opportunity..If I don’t even win ,am forever grateful at least to see my name on an award show in america many have been craving to be on 🥂💎 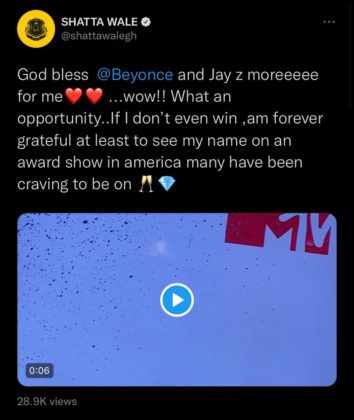