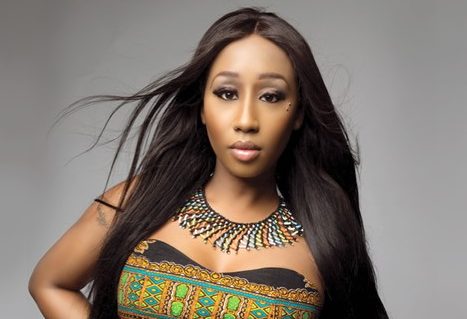 Reactions are presently trailing Victoria Kimani's #Fvckyouchallenge which was released on Wednesday, the 3rd of April, 2019.

The Kenyan artiste's challenge is a direct diss to both Nigerian artistes, Ycee and Tiwa Savage whom Victoria Kimani has called lyric stealer and "African bad gyal

Basically I gotta say fuck you to a lot of Niggas,

also fvck you to a lot of hoes

(This shit might get me into a lot of trouble)

Fvck you Ycee, coz I ain't trying to vex for nobody,

Took my juice took my sauce

You disrespectful Nigga run my check

I say fvck you nigga yea I said it

Next time you try7 it got my goons on deck

Turning 45... still think that you a bad girl

We all know you selling pu$$y and it's so depressing

Whoa and it's so depressing

Whoa, you so fvcking messy

Fvck you all ma haters, I know I'm the baddest..."

These lyrics, which to fans, feel more like slander than anything are being highly criticised as Twitter users state that Victoria Kimani is seeking attention by trying to be another Blackface and also implying that Tiwa is whoring herself in the Nigerian music industry is a proof that women are the ones that bring down their fellow women.

There has been a never-ending conversation in the Nigerian music industry about the support female artistes give themselves and underlying bitterness that nobody gets to see. One artiste whose name has been recurrent in this conversation has been Tiwa Savage with many implying that she does not support other women in the industry like she does the men but Victoria Kimani has brought in a new twist to the beef, implying that Tiwa Savage has blocked her from a show before.

From the reactions so far, the major concentration on the beef has been Kimani's shot at Tiwa's age, which a lot of people criticized as a woman taking a shot at another woman. which is totally wrong.

Here are the reactions;

She wants to be another blackface

Victoria Kimani used her #FvckYouChallenge as a means to drag a “45 year old African bad girl” who offers sex as trade for career advancement.

When Tiwa Savage said women are the biggest people who undermine her achievements, now I really see her point.
And I agree fully. Shame.

Victoria Kimani's #fvckyouchallenge jab at Tiwa Savage just confirms how most Nigerians hate the successes of others. A doctor claims to have found the cure for a deadly disease, other doctors rise and call it a scam; young guy displays wealth, we say it is Yahoo or ritual. SMH.

I don’t think Tiwa Savage has any reason to be pressed about an autotune rider whose last hit was her first hit. Big birdie and her 43 fans can sit this one out.

Tiwa Savage has been off the internet for months; gave these girls three months to eat and grow.

Came back, dropped her #FvckYouChallenge, made it a thing and left again.

But No, these kids won't get off her dick. They have to blame her for their relegation.

Dear @TiwaSavage , please put out another #FuckYouChallenge video but in this one, just stay drinking tea while the beat plays in the background.

The story will be told one day of Tiwa Savage's longevity, durability, persistence in the face of obstacles & constant reinvention. She has been the top female act in Nigeria for over 7 years. Her talent is remarkable but her hard work & determination is even more remarkable.

No Tiwa Savage slander will be tolerated ? everyone is doing good for their own lane .. No name calling abeg ?

AnD Tiwa Is Flippin HOT ?