May D And His Swedish Wife, Carolina Part Ways After 2 Years

Nigerian Singer Akinmayokun Awodumila better known as May D has announced his split from his Swedish wife, Carolina Wassmuth. 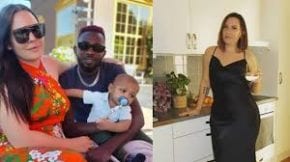 may D and wife, Carolina

May D who is now said to be free made the announcement on his official twitter page on the September 28th, 2020, without stating the reason for the split.

According to the superstar hit-maker he is finally feee after 15 years of being in relationships and also free from his now ex-wife Carolina whom he had spent 2 years with.

I'm Single Again and Free! For Over 15 years I have always been in a relationship I think I need to be alone for sometime!

The singer tied the knot with his Swedish wife in 2018 and welcomed their first child later that year.