South African musician and record producer, Master KG has revealed he was awarded with a 3x platinum certification plaque for his global hit, 'Jerusalema' on his recent visit to Italy. 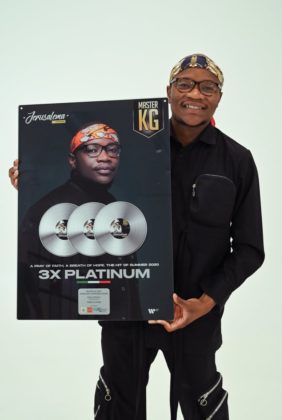 The singer revealed this himself via his Twitter page on Thursday, the 24th of June 2021. Master KG wrote that he landed in the Warner Music office in Italy and they surprised him with the plaque. He also shared a photo of himself holding the 3x platinum plaque. In his words;

I Landed in Italy and they suprised me with this beautiful Triple platinum plaq shout to @WARNERMUSICIT and everyone who took part in this success...Rea leboga..🙏🙏💯💯❤ 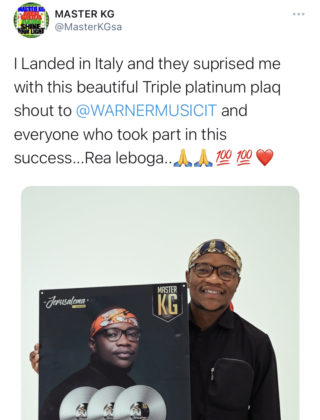 Master KG's 'Jerusalema' song is a global sensation with millions of hits on social media. He also released a remix of the song with Grammy winner, Burna Boy. And more recently, he was named in Forbes Africa's "30 Under 30" list alongside Mavin Records' star, Rema.