#ENDSARS: "All protesters have been released!" - Davido after leading Abuja protest

Davido who led the Abuja protest today, Sunday the 11th of October has announced that the protesters arrested have been released. 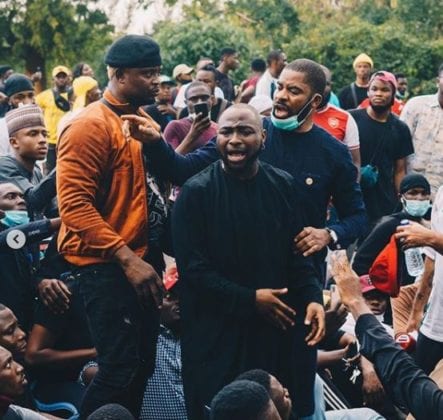 The FEM singer made the announcement on his Instagram where he was seen in a video talking to police officials who seem to be leading him to where the protesters were supposedly arrested.

All protesters have been released!!!

The singer who led the protest in Abuja on the 11th of October reacted to the disbandment of the Special Anti-Robbery Squad stated earlier that the disbandment doesn't mean it is over as the armed forces responsible for the harsh treatment meted to Nigerians need to be served the justice their actions warrants.

Speaking further in an earlier Instagram post, Davido also urges Nigerians to not lose sight of the original reason for the protests which is a better Nigeria and for that to happen, this is just the beginning.

Amidst it all. We must not forget the reasons we are protesting, we must not forget the peaceful manner of the protests and we must most certainly not back down until our demands are met! You either live for something or you die for nothing. Sars ending is a great start but the task is far from completed! now let’s end police brutality as a whole!