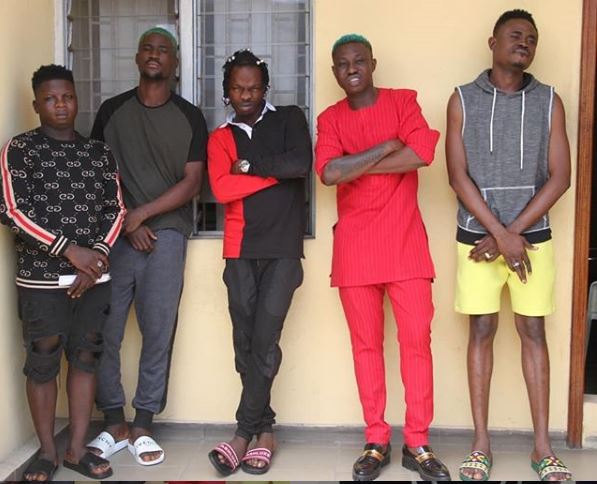 Naira Marley, Zlatan Ibile and others at the EFCC station

The Economic and Financial Crimes Commission (EFCC) has released their official statement over the arrest of Naira Marley,  Zlatan and three other persons.

This statement is coming after they have been picked up in the early hours of Friday, 10th of May at Zlatan's apartment over the crime of Internet fraud.

The Financial Crime Commission has now paraded the artistes, to not just show that they're indeed in custody, but to also inform all that they're being investigated for cyber crime; an act Naira Marley and Zlatan have shown support for in recent times.

A statement was released alongside the photo where EFCC announced that the singers and their friends have released helpless information about their involvement in the alleged crime.

"Naira Marley, Four Others Quizzed by EFCC over Internet Fraud

They were arrested along with: Tiamiu Abdulrahman Kayode, Adewunmi Adeyanju Moses and Abubakar Musa.

Their arrest followed an early morning raid on Friday, May 10, 2019 at 9, Gbangbola Street, Ikate, Lekki, Lagos.

At the point of arrest, the Commission found and recovered a number of items, including laptops, from the suspects.

They have so far volunteered useful information about their involvement in the alleged criminal activities, even as investigations continue.