Due to the aggressive increase in the number of COVID-19 cases, Livespot Xclusive Concert Experience scheduled to hold on the 19th and 20th of December 2020 which has Nigerian megastars, Burna Boy and Wizkid as the headliners have been postponed indefinitely. 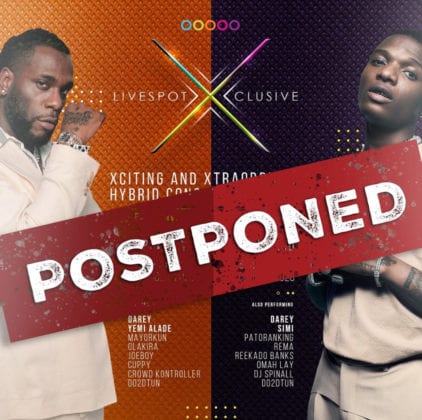 Music veteran and Livespot’s CEO, Darey Art Alade took to social media on the 16th of December of 2020 announced the postponement of the event. His post partly reads:

Within the last few days, we have observed an aggressive increase in the number of COVID-19 and we are strongly convinced that it is our collective interest to postpone the Livespot Xclusive Concert Experience slated for this coming weekend 19th and 20th of December.

Regardless of the thorough health and safety protocol (for which we already had official approval)  that we have put in place, we know that this is the right thing to do at this critical time in our fight against the virus. And we salute all the government and health care workers doing all they can to keep us all safe. We believe you will receive from official sources in the coming days, regarding how to keep safe this festive period, and beyond. 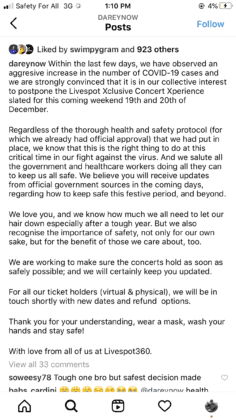 This is not the only anticipated star-studded event that won’t be holding as planned in December, as Davido’s DMW live in concert has also been cancelled.