self-proclaimed African Giant, Burna Boy has been pronounced the winner of the Edison Award, an award that’s given to people to acknowledge their contribution and innovation.

The Award was announced on the 2nd of December and Burna Boy coming out as winner makes him the first Nigerian to win the Edison award and the third African with Youssou N’Dour winning it first in 1994 and Angélique Kidjo in 2018.

In recognizing Burna Boy’s African Giant and also the artiste, the Dutch-speaking platform stated that Burna’s music is not just a great reminder of Fela’s music but also a great work that fits seamlessly into today’s pop music culture. 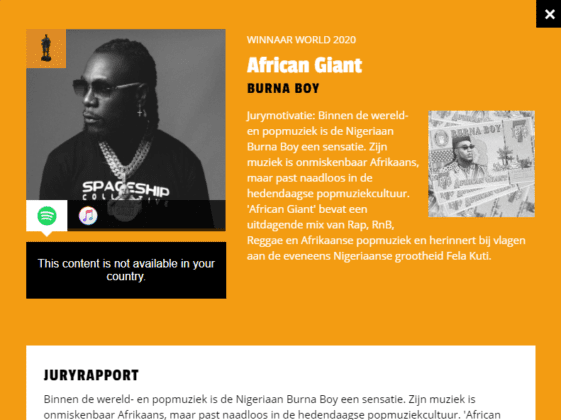 Speaking further about Burna Boy, Michelle Kuypers gave a Jury report on Burna and why both the Odogwu and his African Giant project deserve the recognition of Edison Award;

JURY REPORT; Nigerian Burna Boy is a sensation in world and pop music. His music is unmistakably African, but fits seamlessly into today’s pop music culture. ‘African Giant’ contains a challenging mix of Rap, RnB, Reggae and African pop music and reminds at times of the also Nigerian great Fela Kuti. The latter is not surprising. His grandfather was Kuti’s manager. From an early age, Burna Boy was a musical omnivore. Through his father he heard dancehall and American RnB at school. From Nigeria he moved to London. This diversity of influences can be heard on the album ‘African Giant’, with guest appearances by many greats from the various music styles from which he draws. Each time Burna Boy knows how to bring these together skillfully, on various African grooves, into a coherent whole. The album includes guest appearances by Angélique Kidjo in duet with Damian Marley, the English young soul star Jorja Smith, the American YG and Future. Linguistically this album is also a mix, with guest appearances in English, while Burna Boy himself mainly sings in Pidgin, Yoruba and Igbo on this album. Despite the fact that it is a wonderfully groovy album, the themes addressed are deep. That also fits in the tradition of Kuti: Burna tackles corruption and other abuses in society. 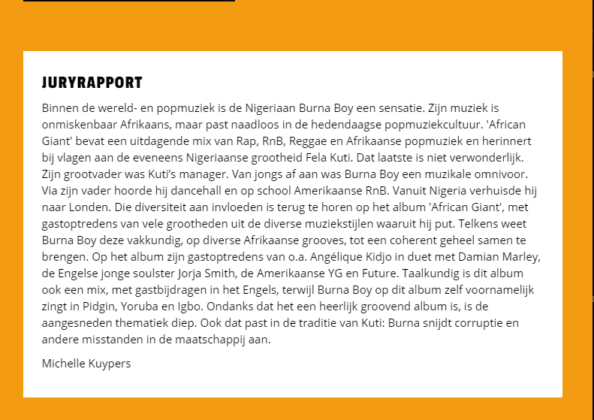