The singer was speaking to Beat FM's Ada on the Morning Rush show on Wednesday, the 14th of July 2021. He was asked if the EP is the only body of work he's going to release this year. In reply, Bella Shmurda revealed this his new album 'Hypertension' is ready. In his words, "This is high tension, hypertension is coming. My album is ready". When asked to explain, he said, "High Tension is an EP, a flavor of what is to come". 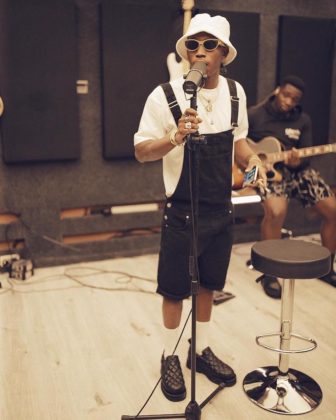 Apart from naming 'Hypertension' as the title of his debut album, Bella Shmurda also dropped a few names as the featured acts. He was pressured by Ada of Beat FM to reveal some of the local and international features on the album. Then, he revealed that he has songs with Popcaan, Julian Marley, and Victoria Kimani.

READ ALSO: "I Have A Track with Julian Marley"- Bella Shmurda Reveals At Hypertension Listening Party

Bella Shmurda was asked to explain his creative process. He said the first he likes to do is connect with people and put himself in their shoes. We can be sure Bella Shmurda's new album will be all kinds of motivational. In his words;

WATCH THE VIDEO BELOW