Liquorose, Emmanuel, and Cross have become the first BBNaija Shine Ya Eye housemates to secure their place in the season finale.

A new twist was introduced to the nomination system today and Emmanuel, Liquorose, and Cross found their way into the BBNaija finale for this year. This happened on Monday, the 20th of September 2021. 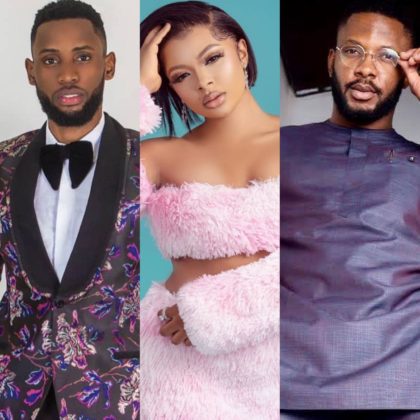 Big Brother introduced the new twist as the housemates were preparing for the arena games today. He announced that the arena games have been canceled and the housemates would instead compete in the Ultimate Veto Power game. Emmanuel won the veto power game and his reward was automatic immunity. In addition to that, he was required to pick the HoH and Deputy for the week who would also be immune from eviction. Emmanuel then picked Liquorose as HoH and Cross as Deputy.

By the virtue of tonight’s happenings in the BBNaija house; Cross, Liquorose, and Emmanuel have become the first Shine Ya Eye housemates to enter the grand finale. The other housemates; WhiteMoney, Saga, Nini, Pere, Angel, and Queen have all been nominated for eviction. The fun part is that only two of the nominated housemates can make it into the finale.