Nigerian singer, Banky W in a new interview with Beat FM revealed that he was inspired to sing his latest single, JO by his wife, Adesua.

Banky W told Simi Drey of Beat FM during the interview that he got the inspiration for the song, JO when his wife danced for him for the first time. The interview was shared via Youtube on Thursday, the 11th of November 2021. 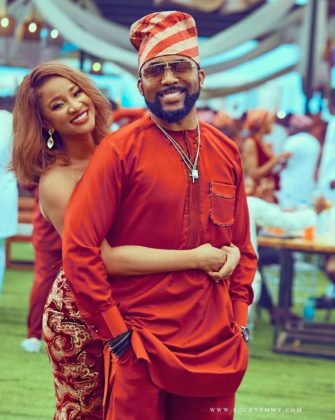 Banky W and his wife, Adesua

Just as he usually does, Banky W returns to our speakers with a brand new single entitled JO. The sublime joint is complimented with a befitting music video that stars the love of his life, Adesua Etomi. Produced by heavyweight beatmaker Cobhams Asuquo, JO serves as Banky's second official single for the year. It is a follow-up to the impressive record Final Say which was released back in February.

On his Beat FM interview, Banky W spoke about getting the inspiration for JO from his wife as well as how they rehearsed the dance steps they executed perfectly in the movie. Banky revealed that he was initially scared because he was supposed to throw her in the air and he was afraid of letting her fall. Simi Drey also got Banky W to put a prank call through to Basketmouth which was very hilarious.