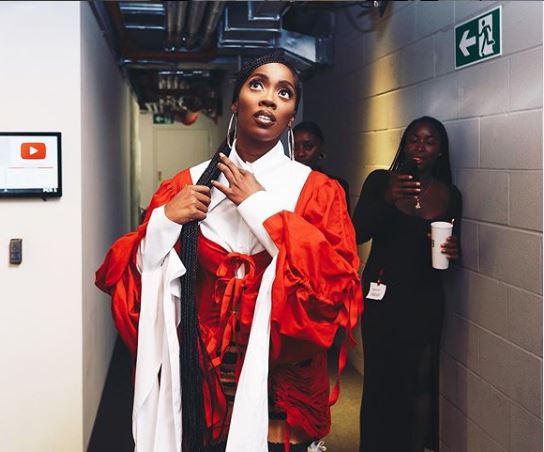 49-99 of Tiwa savage interview with Shopsy

Tiwa Savage is presently on a media tour to promote her upcoming single 49-99 and in one of these interviews with London based Nigerian OAP, Shopsy, Tiwa reveals more about herself, her struggles as a female artist, becoming who she is today with her partnership with Don Jazzy and getting ready to find her foot by herself.

In this interview, Tiwa made some serious revelations about her journey that a lot of people did not know, one of which is her struggles trying to prove that she's good enough for the Nigerian market.

Moving back to Nigeria was the hardest thing... I'm Nigerian but it felt like I had to prove myself again when I got to Nigeria... I don't speak pidgin but I can speak Yoruba... I did my first show Kennis music and I remember getting on stage, I had Kele keel it was already big by then and I got on stage and was like 'hi everyone my name is Tiwa savage" but they started shouting that I should get off the stage and they started stoning me with pure water. I remember looking up the stage to Baba Keke who was like 'just sing don't talk' who's asking you to talk?" It was hard, I felt like I was impersonating being nigerian"

Speaking of being in the industry as a female artist, Tiwa said;

As a female, it was hard. I'll be backstage ready to perform and they'll just say that the governor's wife said they don't want you on stage and this is not a paid show o, I'm doing this for free... they'll say my shorts are too short... some will say 'the owner of the bank wants to see you before the show'... sometimes I'll notice they're not playing my video and I'll call up the station and they'll say your video was banned because it's too sexy... Love love me was banned, wanted was banned, I lost some endorsement

Speaking about her partnership with Don jazzy and Mavin records, Tiwa said;

Like I said when I first moved to Nigeria, nobody wanted to touch me. I went to Storm records they said "No, we already have a female artiste, I went to EME, Banky actually said No, I went to Mo'Hits they said No, so Teejay said we're going to do it ourselves. Me I was like, we don't have money o. but we decided to do it. Years later when Mo'Hits broke up I went back to Jazzy and I was like 'have you changed your mind and he was like let's do this and he signed me up to Mavin.

On why she left the label which she described as a family, she said;

Breaking out of Mavin was one of the hardest decision I made, they were there for me... for me, it was always like I went from Flytime to Teejay and I went to Mavin and I wanted to try things myself and that was one of the reasons I decided to sign with Universal.

Watch the rest of the interview below;