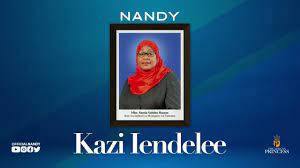 Kazi Iendelee is a famous slogan used by the current government in Tanzania and within the song, the singer praises the current Tanzanian president Samia Suluhu Hassan for doing an incredible job as the leader of the nation while citing President Samia’s achievements in diplomacy, investments, and education sector.

The song is produced by certified Tanzanian hitmaker, Kimambo Beats who has created many anthems for Tanzanian artists such as Papa by Gigy Money, Hatufanani By Shetta & Jux, and Nandy’s collaboration with Joe Boy named Number One.