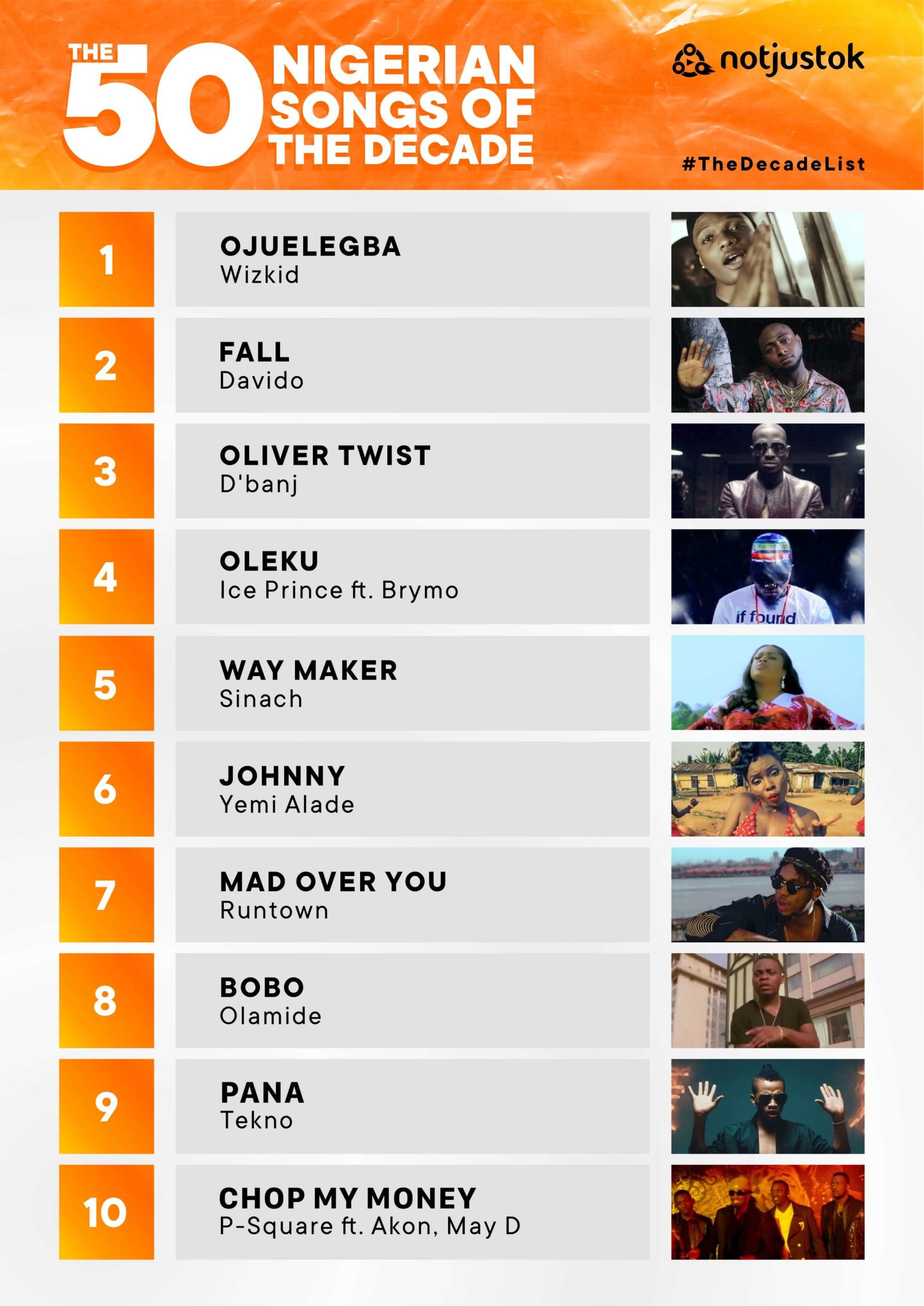 With feature verses from Akon and protége May D, P Square proved to be light years ahead of their time, crafting an Afro Pop banger that still rocks till this day. Per commercial impact, the song, like "Beautiful Onyinye," strengthened the P Square brand internationally.

"Pana" was another chart down Tekno's Afropop path. Its vibe was deliberately slow (and sultry) creating the perfect back drop for Tekno's sensual lyric.

Olamide's "Bobo" was the biggest song at the time. Everywhere one went, one heard the Young John-produced banger and it called the body to dance Shakiti Bobo. And what a dance it was.

From Ghana to Nigeria to everywhere else, Runtown's warm love song spread, as people were taken by everything which made the song. The lyrics, the production, and the unique Soundgod melody.

Yemi Alade's "Johnny" was the song which propelled the talent award winner to continental fame. A typical Yemi song, "Johnny" is unapologetic, energetic and locally-influenced. With over 100 million views on YouTube, the video remains one of the most viewed Nigerian videos on the platform.

Often hailed as Nigeria's biggest crossover song, Sinach's worship anthem has been sung by just about every International church choir, even in America. With her massive numbers on YouTube, Sinach has been one artiste who's well tapped into the gold mine which is gospel music.

Arguably the biggest Nigerian rap song of all time. "Oleku" saw Chocolate City artistes Ice Prince and Brymo join forces to deliver epic verses and an epic hook over an epic Jesse Jagz production. When the song came out (and for a long time afterwards), it was being played everywhere and it set the careers of the artistes which made it.

Proclaiming his love for popular women in entertainment, D'banj was surely an Oliver Twist. The song played into his repute as a ladies man. With Kanye West featuring in its video, it would also become one of the first crossover efforts from a contemporary Nigerian artiste.

Davido's "Fall" is a purposeful delve into the American market, with Nigeria being –naturally– conquered. As the longest charting Nigerian Pop song in Billboard history, and the most watched Nigerian video of all time on YouTube, "Fall" finds itself in elite company alongside the biggest Nigerian songs of all time.

At a time when Wizkid was poised to break into major international markets, he released "Ojuelegba," a song which recorded his rainy days, the times of strife. The Legendary Beatz production was, at once, vibrant and laid-back. Everybody wanted to record over its beat: from Sarkodie to Drake to Skepta. The latter duo being on its remix would help in pushing the Wizkid gospel internationally and "Ojuelegba" would become one of the first contemporary attempts on the "Afrobeats to the World" crossover agenda. "Ojuelegba," more than just being a dope song, opened doors. And all these it achieved organically.

"Ojuelegba" by Wizkid IS the Nigerian Song of the Decade!