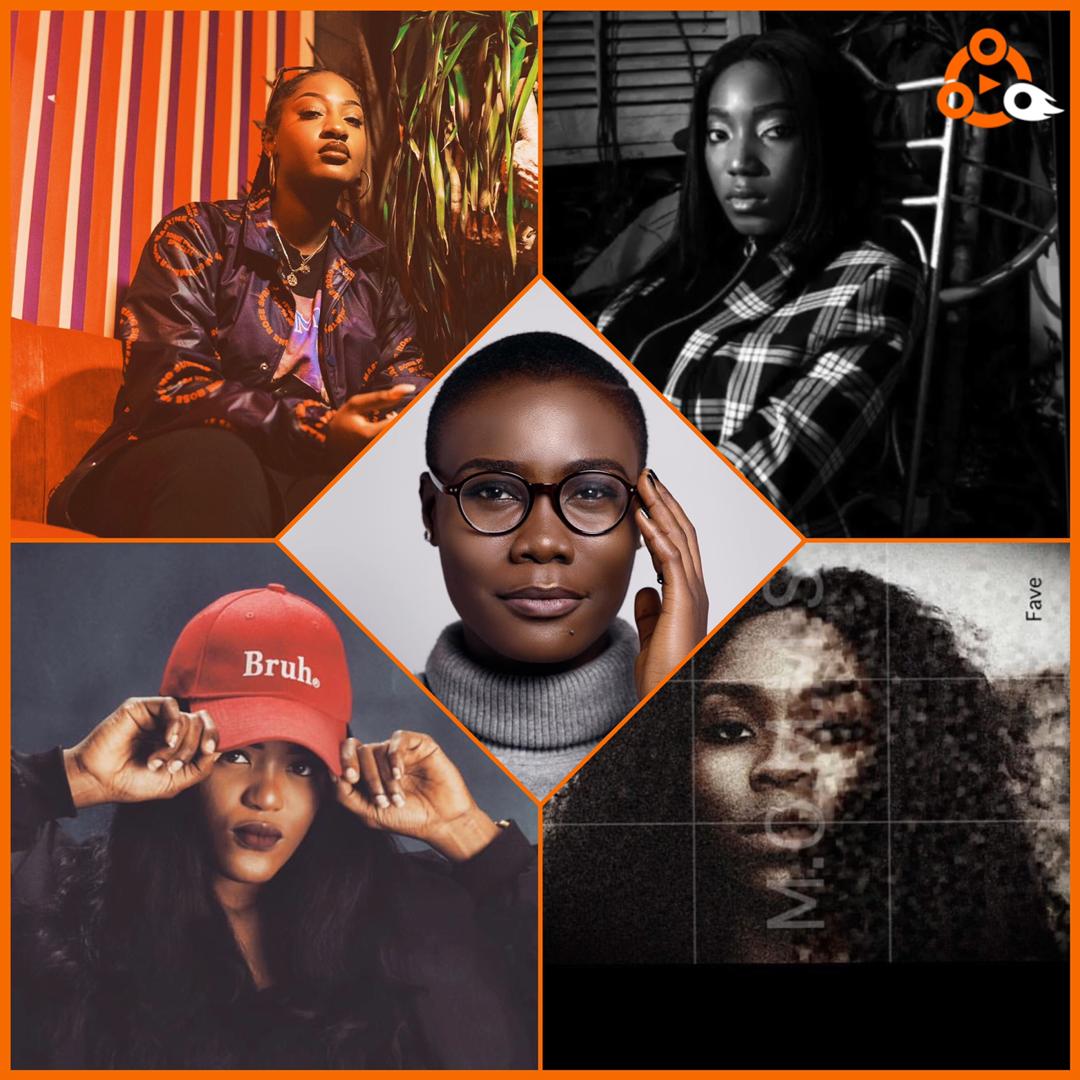 An Overview: #WCW | 5 Female Artists That Are Popping Right Now

In this appreciative piece, we honor today's WCWs, five artists who've inspired great conversations about their art, connected ingeniously with their fan bases, and above all, have given us sweet music to enjoy.

We're positive they can only get bigger, given the unique and carefully-tarried path of these five.

Tems has hit great strides as an artist, since 2019's "Try Me." That song, many a young person's anthem of freedom, has put on Tems great odds whenever she released music (she's tacitly delivered each time).

In the past, her arresting melodies (which has now earned her a lovable fan base, Rebel Gang) had excelled alongside rap duo Show Dem Camp ("Shadow of Doubt," amongst others), and some of her songs, "Looku Looku," and "Mr. Rebel," had impressed, a set-up for what would come in 2020: collaborating with Wizkid, featuring on a Khalid song (alongside Davido), creating great vibes with Odunsi ("Decided"), and casually killing her feature on a DRB Lasgidi song. ("Trouble," off the Pioneers album.)

The world is awakening to Tems (born Temilade Openiyi) and this year should see her emerge as one of Africa's leading divas. What makes her rise truly magical is that Tems holds her person at the core of her music, and seems unhurried by the capitalist construct of making music. "These Days," her first solo release since "Try Me," sees the 23-year-old excites with alt-pop rhythms, weaving an experience that stays with you long after the its last second.

In this age where social media has announced its place as a direct link from artist to consumer, many artists have taken their talents to its world, connect with like minds, and gauge reception before even making official work, a test of some sorts. That has been the story of Fave, 20, who's quickly built a teeming fan base for herself, thanks to social media (and of course, her precocious talent) and her understanding of it.

Responding to a demand by Lagos-based artist and producer Jinmi Abduls to smash some instrumentals of his, Fave –born GodsFavour Chidozie– didn't waste anytime on that, releasing a video (first on Twitter, then on Instagram) on which she did a freestyle of the then-unreleased song, drawing in hordes of listeners with her unique voice and dexterous songwriting. Her bubbly personality also sold her as the perfect package. The emPawa group (as led by Mr. Eazi) took notice, and other artists have, too. Since then, she's continued in her trusted way of organically generating clout, when she jumped on a challenge by Afro Pop artist Peruzzi, and who knows what might happen next?

So @JinmiAbduls tweeted the link to some of his free beats some hours ago. Here’s one https://t.co/Ala9tDKh1Y pic.twitter.com/B2J766C669

After the video went viral, Fave released the official studio record, "N.B.U," a romantic number which fully reads "nobody but you". As she'd shown on previous releases ("M.O.M.M.S and "Dal"), "N.B.U" tarried by the expressive, telling stories in songs which were at once sentimentally beautiful and poignant: You know it when you've listened to a special musician, and Fave gives me all the vibes.

In between writing pieces, I edit a start-up website for a close family member. A piece I've read from one of its writers expressed the young man's sentiment: female rappers: where are they today?

It's a question that's been asked by many, and unfortunately, there aren't many answers by way of names. But there are names, and again, let's do away with the "lesser expectation" placed on a female rapper, seeing as one of the hottest acts on the rap scene, as it is, is a lady.

Phlow (real name Stephanie Asuai Eyime) navigated the underbelly of rap superiority with Str8buttah, "a production company predominantly known for affiliations with hard-nosed, battle-tested lyricists," reports Dennis Ade Peter in an interview with the rapper, noting how "Phlow immediately garnered attention as ‘the female rapper who could hang with her male colleagues'."

Marmalade, the artist's fourth project in as much years, is a vibrant project built from the eclectic sound Alpha Ojini, has been affiliated with through his career. Phlow, on Marmalade, raps as she's never quite done before, ceding lyricism to overall artistry, coming up with one of the best projects this year. With songs like "Cheque" and "Energy" doing well across some influential platforms, there's a sense of destiny about Phlow. That surely, soon, she'll be a total answer to the question by that young and curious writer.

The word Yellow –as title for a piece of music– might be largely associated with another artist, but there's an even better Yellow, and it's created by a woman.

Asikiya Albright George –who simply goes by Asikey, pronounced Ah-see-key–ya is an AFRIMMA-winning artist, and only months ago, resurfaced on the music scene with her EP, Yellow, a compact listen of six songs, little worlds in which mental health –an underrepresented reality in Nigeria– is sung about, delivered in alt-pop and rock melodies. Brymo, whose album Yellow continues to spawn positive reviews, is featured on the project, combining with Asikey for a stunning duet on "The kind that live forever," a triumphant moment in a project with its depressive and manic moments (as Asikey lived it).

"Yellow is a metaphor for something good coming out of something dark. Yellow is hope. Yellow is positivity, Yellow is a gift to me, from my darkness and my own pain," Asikey said to me over the phone,  explaining the reality from which Yellow, only her sophomore project, takes root.

It's all in the music: in the titular track –the last of the project– Asikey sings: here's to picking up yourself back when you fall.

Given the times we're in, music like Asikey's becomes a warm breathe on the neck, the companion who'll never quarantine from its listener.

Emotional transparency remains important to a kind of artist; the one who often than not, must share her truth in the hopes of bringing succour (or perhaps understanding) to a listener. Dami Oniru, an artist blending the sounds of R&B and Soul to tell of human experiences, holds such intentions about her art. Her music is often contained in minimalist production, a deliberate move to embolden her voice –bubbly yet introspective, like an excited whisper in the ear.

Dami Oniru released her first single in 2015 ("Iyawo"), a Folk-style medley delivered in the unique tones of Dami's voice. Since then, she's put out a slew of singles and last year, her debut project, Bri's Lounge, was released. Earlier this year, in February, an Ademola Falomo visual was shot (in which three songs from the debut, "Alive," "Higher," and "Ready," were patched to cohesion), and in a little over 4 minutes of screen time, casts Dami in a number of scenes that amplify its central theme of rebirth.

Dami Oniru's latest song, "Nowhere To Run," titled rather fittingly for the times, is yet another excellent entry into her discography. "You will hear that the song sounds like a soundtrack for a movie," Dami said in conversation with Native Mag, talking of its pan African influences. "It was a demo I wrote for Beyoncé’s 'Lion King: The Gift' album. It’s inspired by Lion King, and I think the message in the song is really powerful so I thought no better time than now to spread the positivity. That’s always my goal, to put a smile on someone’s face through connecting through my music."

Hopefully we'll be getting more music from Ms. Dami, and with a collaboration with Tec (one half of rap duo Show Dem Camp) on the rapper's speculated love-themed solo project, some degree of excitement –while you listen to her already-released songs– is warranted.