“No pressure to deliver” – Davido’s Signee, Liya Confident of Success

Having released her first official single ‘Melo‘ as a DMW artist, upcoming singer, songwriter and DMW First Lady, Liya who was interviewed alongside DMW boss and megastar, Davido on TheBeat99.9fm is confident about her sound and optimistic about succeeding as a female artist in Nigeria. 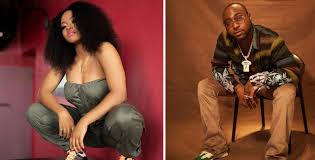 Upon her official announcement as DMW’s signee, Davido made Liya a promise to make her a global star and having referred to that promise, TheBeat99.9fm OAP’s Biola and Segun were curious to know if she was under any pressure to deliver despite being a female artist in a male-dominated music label and music industry. The ‘Melo‘ crooner, Liya, however, expressed her confidence in her sound, how accomodating her new family is and why she’s under no pressure to deliver. In Liya’s words during the #MiddayShow interview which happened on the 11th of December 2020:

No Pressure to deliver. Its like having 10 brothers behind you as a backbone. So yeah, zero pressure.

I’m just here to do my style, take you on a journey of Liya’s world, basically that’s what Melo is all about, welcome to my sound and let’s all enjoy, explore, have fun, make mistakes and learn more

As the interview continued, Liya further expressed that despite just releasing her official single under the DMW label, she, however, began her music career 4 years ago and she also revealed that her forthcoming E.P which was initially scheduled to drop in December has been postponed to January. She expressed:

Professionally have been doing music for like 4 years but as kid, I have always loved singing.

I should be dropping an EP next month, January. Actually it was meant to drop in December

When asked who her music inspirations were, Liya revealed some interesting names such as Angelique Kidjo, Nina Simone, Don Williams, Fela Kuti and labels her style of music as pure AFRO with an openmindedness of blending AFRO with other genres of music such as Pop, RnB, Trap. She also expressed those female artists she looks forward to making music with.

Having admitted to being very single and not searching, optimistic Liya hopes to achieve mindblowing success within 6 months despite her DMW boss, Davido’s 1-year step by step plans on the journey to fulfilling his promise of making her a global star. She expressed:

My personal projections are consistency, I’m all about doing good music, not departing from my sound. I’m giving myself 6 month.