Interview: Crayon Is All About The Energy, Vibes & Community 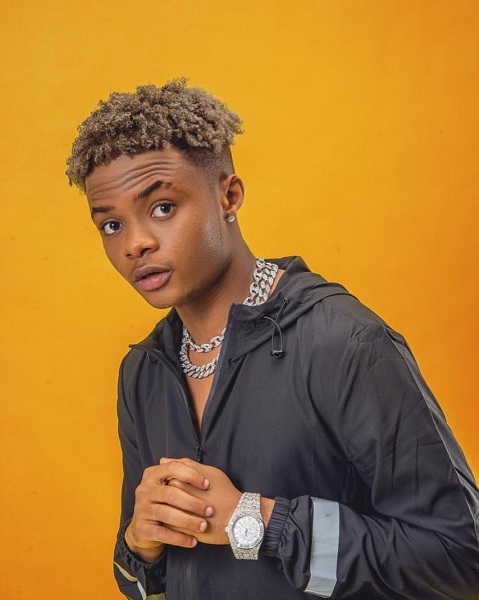 Recently Notjustok interviewed Afro Pop artist Crayon over a phone call, a cold Lagos day. What follows is a compression of that conversation.

2019. Barely a week after the release of his debut project Cray Cray, Crayon was performing in Port Harcourt and the reception to his songs awed the youngster. “People were going crazy for ‘So Fine’ and ‘Gock am’,” Crayon recalls excitedly in a WhatsApp voice note. “I was over the moon and the energy was so infectious. It was spiritual and I loved it.”

The music of Crayon is very communal. It's the sound of people roaring an upbeat chorus or moving to the similarly paced beat. When the artist in 2019 signed to Don Jazzy's record imprint which has housed Afro Pop icons like Tiwa Savage and Dr. Sid, it sparked celebration within the Lagos hoods he once called home. Weeks later his songs moved onto the dancefloor especially “So Fine”. The Afro Pop leanings of Crayon –young, wild, free– quickly earned him admirers. As he tells it, this was cultivated from the earlier years of magic in the streets. time, on was born in Orile and moved to Ojo Road, which shares boundary with Ajegunle, when he was seven. Crayon was omnivorous, seeping street culture which held communal activities in high regard.

“I had loads of friends; I was always around guys. Bad guys, bad girls. Matter of fact, my guys were the coolest guys in the hood –every guy wanted to be like us. We used to play football, watch football matches; in the evenings look fresh, look for girls to toast and all that.” You can imagine a soft laugh follows this admission.

Memories of those early days are visited with affection from Crayon. Threaded into the youngster's coming-of-age was his experience with music. A precocious talent, Crayon combined footballing skills (alias ‘Coutinho’) with his firm interest in music. Freestyled a lot at the time and built himself a fan base, of mostly close friends who'd watched him tear beats to shreds with his fluid and poppy singing.

His father was also an MC at some point but later switched lanes. “He stopped, started selling CDs and so we had all the albums in our house –name it. From P Square to Mo Hits to Bracket, Wizkid, Zule Zoo, Danfo Drivers –everybody. This exposure helped me a lot in my career. Especially in my writing.”

The road to pop stardom is littered with unrealized potential. For every Wizkid who made it out of Surulere, thousands didn't. Crayon had this in the back of his mind when he moved into the Mavin's headquarters in 2018. He was acquainted with the music business. Learned a great deal about branding. Actually making music was given less priority in those early days and Cray Cray was only a collection of the most fitting songs Crayon made during that period.

Whether it was the romantically charged “So Fine” or “Bamiloke” which dripped humor and braggadocio in its fun, Crayon packed the tape with the excesses of young Nigerian life matched with the riveting sound gleaned from working with top producers like Baby Fresh and Ozedikus.

In his second wave as an artist, Crayon has, for sonic direction, again turned to a producer: London. He's the producer of his breakout single “So Fine,” their initial contact coming through Baby Fresh. This year, London has produced or co-produced four songs by Crayon. Three of those songs are three weeks apart, a tireless work rate the artist credits to his frequent collaborator. “The chemistry between me and London is very special because the energy was right from day one. He's a crazy guy when it comes to music. His work ethic is crazy –he makes me work times two and I like that.”

“On Code” is their first track together as co-creators (the producer is a credited feature) and the second of Crayon's inspired run of songs. On production duties London pairs Crayon's excitable singing with a mid tempo beat built from mild percussion and ominous keys. Although rich and realized, the song was made a while ago when Crayon was a simple youth with little care for the blond braids and sleek fashion. “When we made the song we were at our lowest point. I was broke as hell, I had nothing going. I was just recording songs praying that I get to where I am right now. And London too was going through a lot; he had family issues cos he left school for music. It was crazy –we poured our heart and soul into this record.”

Speaking of his recent activity in terms of releases, Crayon said: “I just dropped ‘Sometime,’ ‘On Code’ and ‘Do Me’ and all three songs follow a storyline. It wasn't just a random drop, it was deliberate. ‘Sometime’ is about me and a girl spending time together... young love. ‘On Code,’ you feel me, nobody has to know. Then ‘Do Me’ was me telling the girl ‘don't do me anyhow, I dey for you, I just want make we dey together. Make I lick your lip gloss/ do am for Tik Tok.’ You know, all those youngin' things. New generation sound, new generation lamba, the lyrics and approach to the music thing. I'm really happy that Afrobeats is where it is today and I'm just here to take it to the apex level. I'm so excited about the future and I can't wait for you guys to experience it with me.”