If your music is popping in the East, why sit down in Lagos? Go to the east and try and work the market till you achieve success with them.” Camillo Doregos.

While each of these moments carries its individual weighty influence and would almost be impossible without the prior event, Mr Eazi’s crossover into the global market arguably ushered in a wave of digital awareness unbeknownst to a large part of the Nigerian music industry.

At the helm of Mr Eazi’s transition into becoming an African pop-culture staple and an eventual global ambassador of African music excellence was his manager, Camillo Doregos, a man unknown to many and yet a formidable force behind the scenes in the African entertainment industry 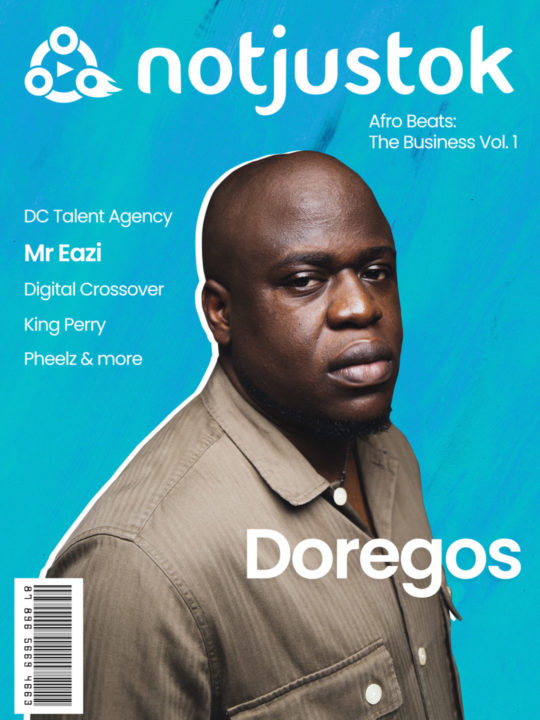 Lagos-bred Camillo Doregos was a man unbeknownst to many until Mr Eazi’s soundscape-shifting slew of singles, Skin Tight, Anointing, and Hollup. The stocky graduate of Pharmacy from Ghana’s Kwame Nkrumah University (KNUST) ventured into the entertainment industry in his early years at the University.

“In my first year, I started a group with a couple of guys and we started throwing parties. The first party we threw was a big flop. After the first semester, the group remained just me and one other person.” Despite the failures, Doregos remained unfazed and proceeded to throw more parties. “The first artist I brought was Shank. Next year was Davido. The year after that, I did Burna Boy.”

Doregos held parties and promoted club events that held KNUST spellbound but alongside Doregos was fellow student, Tosin Ajibade - Mr Eazi, who threw parties of his own “In university back then, Mr Eazi was also doing parties but he stopped doing parties then we later started throwing parties together”. Doregos’ growing success saw him rise quickly to a household name for the most sought-after entertainment events in Ghana.

Regardless of Doregos’ entertainment exploits, he always had a penchant for one thing; flying aeroplanes.

“When I was done with pharmacy, I went to flying school because I wanted to be a pilot. I told my dad I was going to do my Masters in Pharmacy, I dipped and went to South Africa and did my private flying license and commercial flying license” The licenses took sixteen months to complete, and Doregos went solo for the first time ever under eight hours of training. While in South Africa, Doregos worked with KNUST mate, Peter Clarke, who was signed to the Naeto-C-powered WFA record label. Peter Clarke’s 2013-lustful summer anthem, Amaka, soundtracked raves and parties in Nigeria during the same year.

“While I was in training at flying school, a mutual friend reached out to come onboard Mr Eazi's team.” Mr Eazi reached out to Doregos on account of his business acumen, prolific network, and prior track record with notable artists. Doregos returned to Nigeria in 2016, and the partnership between the flying school graduate and the now-global artiste took off.

In May 2016, at the Vodafone Ghana Music Awards, Wizkid introduced Mr Eazi as a new artist under Starboy Records, placing a marker on Mr Eazi’s ascendance. “I think it was the Ghana Party in The Park where Eazi was performing and he wanted everybody to say happy birthday to Wizkid. We knew the R2Bees guys and their team. It was through R2Bees that we linked him. It was simply an affiliation”

Later that year, Mr Eazi ushered in a tempered soundscape within Nigerian mainstream markets with a slew of singles that earmarked the homecoming of Mr Eazi. I question if the soundscape shift was intentional from the jump “It was just music. There is an EP that is called About To Blow that had Bankulize amongst others. At that point, there was just a shift, the rise of a new generation that wanted a new type of sound” Doregos mentioned before adding examples of the current soundscape shift that propelled the rise of artists such as Omah Lay, Fireboy, and Rema, Pop Smoke’s global influence with drill music and the eruption of South Africa’s Amapiano.

Within a year of Mr Eazi’s upstart as one of the vanguards of a new wave of Afrobeats, the serial entrepreneur turned artist released his debut album, Accra to Lagos which stamped his imprint on the Nigerian scene “Everything was intentional. Nigeria is a saturated market, there’s a lot of artists in Nigeria. What we thought as a team was that if a market is vibing to your music, you have to invest in that market. That was the strategy: to prioritize time and resources to markets that had the highest consumption rate of Eazi’s catalogue. If your music is popping in the East, why sit down in Lagos? Go to the East and try and work the market till you achieve growth and a steady following.”

Doregos said emphatically of the strategy behind Mr Eazi’s digital crossover that led to collaborations with United Kingdom attention-grabbers such as Rudimental, Lotto Boyz, and M.O. “We did a lot of features in the UK Market. That also helped with putting us in front of other people. With the right collaborations, we were able to diversify our listening base into virgin territories and also put the music in front of unconventional listeners. It’s not about you going to get a verse from some big artist because there are people that do not know the artist here. With collaborations there, they’re looking for you in their own territory, and they’re going to promote it in their own territory.” Another essential element in enforcing Mr Eazi's crossover were the road tours orchestrated and curated by Doregos.

Regardless of the many successes attributed to Doregos for shepherding Mr Eazi’s nascent growth, Doregos is quick to credit fellow team members and Eazi as well. “There was a full team of people behind Eazi. We had Mariam, 9jaBoy, Ikenna, Meister, Clay, Nikita, Osinachi. It was just close friends coming together to push one person. One good thing about Eazi is he likes to take the gamble on himself, so the team had room to try a lot of experiments. Daily, it was great because there was a full team of people & everybody was knowledgeable and competent ”

For many within the Nigerian industry, Mr Eazi’s break-out and continued success was a shock as he sidestepped gatekeepers and established a digital presence that was almost second to none among his break-out peers. “We were early adopters. You have to invest time in the new platforms. Spotify is now established, Apple is now established in the African market but at that time, they were yet to have a presence in Africa and they were looking to break into the market.” A year after his critically-acclaimed debut, Mr Eazi followed with another travel-themed project, Lagos to London, and in 2019, Mr Eazi performed at arguably music’s biggest stage, Coachella “We also had people we were consulting with. We wanted to perform at Coachella, I set up a meeting with Paradigm. We got to Coachella months later. The CEO of Coachella, Paul Tollett, flew down to Nigeria and shot a documentary with Eazi.”

For most of his career, Mr Eazi has carved an image as a blueprint for African indie success. “For me, the definition of an indie artist is that you have total creative control of your work. It doesn’t mean you need to distribute independently, it also doesn’t mean you can’t have  partnerships.” Doregos tells me, before informing me about several partnerships; licensing and publishing deals with Universal, Sony, and others. “Being indie does not mean you cannot work with these guys, but it has to be on your own terms. ”

I pondered how Doregos, who has engineered multiple deals, understands legal terminologies. "There are many things you can look at in music before signing a contract. First, look at the money, where’s the money coming from? Look at the duration, how long are we in business for? And Look at the termination clause.” Regardless of this, Doregos still acknowledges the need to get legal advice before signing contracts.

What do you do after doing all the biggest shows?

“I learn. At Coachella, I watched J Balvin and Rosalia performances, with particular attention to the level of production put in. I feel like we still have a long way to go in these parts,  I have not accomplished anything yet.  Coachella is just one festival, there is Lollapalooza, Glastonbury” He goes on to name-drop festivals across several continents “Every time you do something, it’s a totally new experience.”

In 2020, Doregos started his talent agency, DC Talent Agency, which boasts a roster of serial hit-maker producer/artist, Pheelz, the versatile prodigy King Perry, South Africa’s Frank Ca$ino, Grammy-nominated Kah-Lo who is the most streamed female Nigerian artist on Spotify and many more. Alongside handling a bevvy of talents, Doregos is still passionate about flying, with the renowned artist manager investing in a home simulator as he looks to take his talents to new heights.

What do you think of where African music is headed?

“Africa is the next oil field that people are trying to tap into.” Doregos cites the electronic music boom, and the dancehall wave from back in the day “Everything is a trend. Everything is a vibe. It’ll fade, but it is not like it’ll dip and vanish.”

For more issues of Afrobeats the Business, keep up with Notjustok via Twitter and Facebook for updates in real time.