Two Nigerian rap heavyweights M.I and Vector Tha Viper are engaged in a rap beef and the internet is agog with talk of the resurrection of the Nigerian rap scene. It’s Football Saturday but the number one trending topic in Nigerian Twitterverse is #TheViper, the title of M.I’s latest reply in the rap beef series. In a list of 20 trending topics, 6 of them are related to the song- ‘Lanre’, ‘M.I Abaga’, ‘Vector’, ‘Psalm 1’, ‘King Kong’,  and ‘diss”. 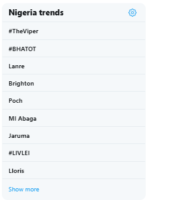 It's World Teacher’s Day and this is trending as well, but it is quickly looking like M.I chose this day to “school” Vector with this bible-quoting but merciless #TheViper track.

The origin of the Latest Installment of the M.I and Vector Tha Viper beef

It started as a battle of the cyphers sponsored by cognac giants Martell and Hennessy featuring both heavyweights and other ‘younger’ rappers.

I worked on a number of influencer marketing campaigns for Hennessy dating back to 2012 when M.I and Naeto C headlined the Hennessy Artistry releasing the song “Bartender” in celebration of it. Fast forward to 2019 and M.I is with Martell and Vector with Hennessy and the cyphers have metamorphosed into a much deeper trade of words culminating in ‘Tetracyclin’ and now ‘TheViper’, the latest tracks by Vector and M.I.

The brands have been taking somebody shots as well as getting mentioned as the genesis of the rap beef gets traced. Hennessy is a bigger brand than Martell in Nigeria and M.I hasn't hidden his interest in “helping Hennessy” spend their money first tweeting about bidding for the Hennessy contract then directly mentioning it in the lyrics of the latest installation of the Martell cypher saying “and that other cypher, this is how to spend your money’. I wonder how the brand managers of Hennessy felt after hearing that one and seeing how their headliners are getting “bodied”

I am a fan of Nigerian rap music. I am a Vector "Lanre" Tha Viper fan, I like songs from lafiaji; King Kong and King Kong remix, and his song ‘8’ is still one of my favourite songs for its flow and easy vibe. Vector has remained raw, a bit like an eagle that has never really taken flight.

A few awards here and there but in the conversation about the growth of rap music in Nigeria there are so many other names that would come before his and M.I doesn't mince words in #TheViper when he says “You're not even top 5 from Yorubaland, Mode, Eldee, Baddo, Dagrin, Remi, YCEE and Falz Omo see the queue (Play on words referring to the rapper CDQ)”. M.I in one swell move covered different bases showing respect to other rappers that could take an interest in this as well as putting Vector in his place.

Looking at the lyrics a bit more M.I accuses Vector of jealousy and says he has decided not to destroy Vector but to tell him the truth instead. He talks about Vector’s beef for him being traced to one of his first songs which is probably the song  ‘Kilode,’ in Vector’s State of Surprise album.

M.I goes on to talk about some of the people that have been in Vector’s life. From his label, YSG entertainment which he went to court with, to his cousin who sat in jail with him when he was arrested to rapper AQ who was with M.I on the Martell Cypher whose label, 100 Crowns now operates under Chocolate City.

M.I also refers to Vector’s finances four separate times, first saying “I know your fans are gonna demand that you revenge but will they crowdfund for you when it's time to pay your rent”. He then offers to allow Vector float his record label under Chocolate City/Warner with a 20m startup capital- "I'm willing and able, I'll put 20 million on the table. That's budget for you to spend and CC will float your label. Just swallow your pride, let me show you how to be king."

Next, he says Vector went to a Chocolate City Group-owned lounge, CCX Lounge and did not spend money saying it's okay Vector and his guys can eat free food. He finally ends the finance arc with the deepest sub saying Vector is roasting in his baby mama's BQ.

M.I is not afraid to brag about his achievements and comparing them to Vector’s. He talks about how his shares in Chocolate City can feed Vector’s kids and how he built everything from the ground up. The assault continues throughout the track and ends with what sounds like Loose Kaynon telling M.I to finish Vector with a track so hard that Vector will not be able to reply again.

Honorary mention to lines in the song that took me back to secondary school chemistry and physics.

I am a big Jude "Mi" Abaga fan following him on his journey from Crowd Mentality to his ‘Talk About It’ album to ‘M.I 2’, ‘The Chairman’, Illegal Music series to Yung Denzel.  Beyond the music my favourite things about MI have been how he brought respect to rap music in Nigeria, how much he has contributed to the industry, his evolution to a music label boss and his continued relevance in rap music today, a few years after he tried to "retire". He reminds me of one of my favourite rappers JayZ and there are so many similarities between them. Still waiting on his Queen B.

M.I. Abaga and Vector Tha Viper are pretty close in age and their influence on the rap culture in Nigeria is massive. However, if the conversation about greatness and rap is to be had in Nigeria and indeed Africa is to be debated, there is only one name among the two that comes to mind…..M.I ‘Mr. Incredible’ Abaga. With this "beef", M.I might be doing more for Vector's career than anyone else has ever done. Maybe the 'eagle' will get a chance to fly.