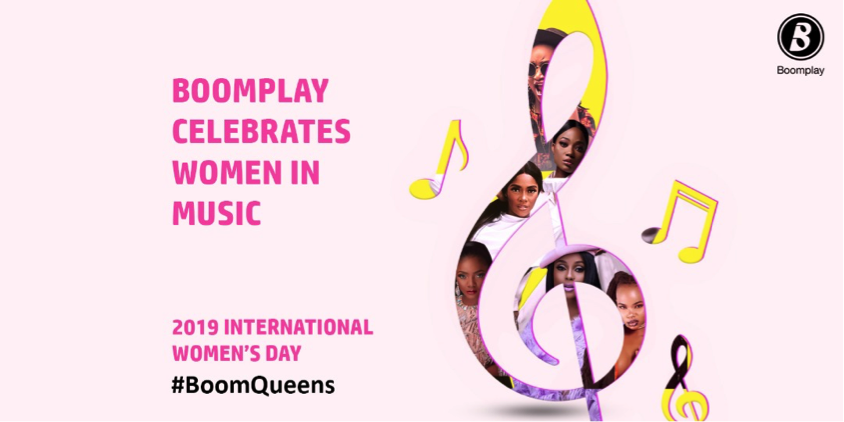 From Tiwa Savage to Efya, Rihanna, Vanessa Mdee, Fena Gitu and so many more; these creative and talented women have been changing the narrative one day at a time in the male dominated industry. The Boomplay app will have a feminine look on International Women’s Day, March 8 to showcase, promote and celebrate women in music. The app will feature songs, albums and playlists championed by women on all sections of its homepage.

Boomplay will also be running a play time campaign for a chance at increasing streaming revenue and numbers for female artistes whose songs will be featured in the BOOM QUEENS playlist; a playlist consisting of songs by some of the best female artistes all over the world.

On this initiative, Ms ‘Tosin Sorinola, Boomplay’s head of Public Relations said ‘ The conversation on gender equality and parity is one that is constantly ongoing and on occasions like this, it is important for us as a platform with so much interest in promoting women in Music, to show our support in the best way possible. This is not a one-off campaign for us, it’s one that started since inception and will continue, a pledge evident in our daily and weekly activities and inclusions’.

This women’s history month, Boomplay users on Android and iOS stand a chance to win iPhones and loads of other exciting gifts across Nigeria, Ghana, Kenya and Tanzania; its major operating countries. To show support to women in music and stand a chance to win big while at it, users will be required to subscribe to any of the available music plans on Boomplay (daily, weekly or monthly) and stream the Boom Queens playlist.

Boomplay app, which has over 42 million users and recently launched its iOS app in December 2018, boasts of an expansive catalogue consisting of over 5 million songs and videos from local and international acts.

Top 5 Benefits of Gaming on the Go