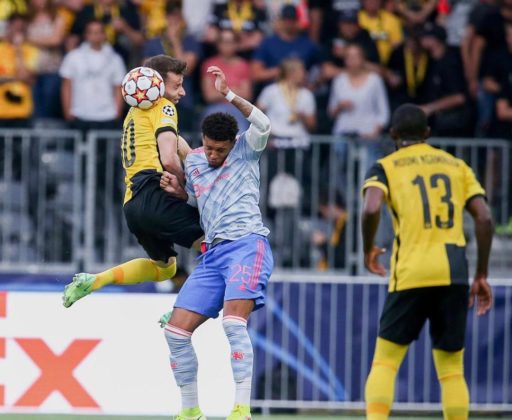 Young Boys attacking substitute Jordan Siebatcheu scored the game-winning goal in injury time to give his team a 2-1 victory over Manchester United.

The 10-man United got their break when talisman Cristiano Ronaldo found the back of the net as early as the 13th minute, making him equal the all-time Champions League appearance record, matching former Real Madrid team mate Iker Casillas' 177 games.

Manchester United's right back Aaron Wan-Bissaka, however, made things a little difficult for his side after he was sent off in the 35th minute for a tackle on Christopher Martins.

Former Real Madrid defender Raphael Varane was introduced at halftime, but it wasn't enough to prevent the young boys from grabbing a deserved equalizer in the 66th minute, courtesy of Nicolas Moumi Ngamaleu.

Goal scorer Ronaldo was subbed off later in the second half as United again changed formation, with the visitors needing a fine late save from goalkeeper David de Gea to keep Young Boys at bay.

However, the late drama ensued as American forward Siebatcheu took his chance in the stoppage time to ensure that Manchester United's Champions League opener kicked off in a horrible way.