Lewis Hamilton and Max Verstappen headlined the Italian Grand Prix after crashing into each other. The British driver was seconds away from a tragedy after the Red Bull car landed just a few inches away from his head. 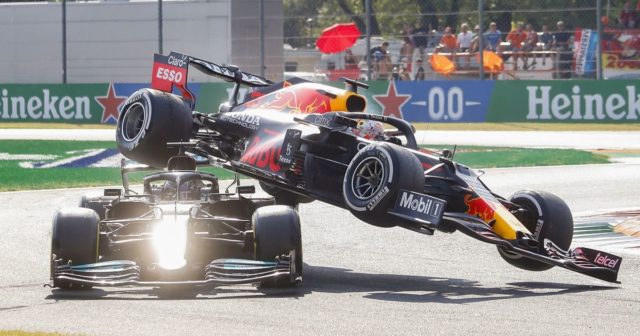 Verstappen's car flew off the curve at Monza to land on top of Hamilton. The saving grace for the Brit was the protective Halo device that stopped him from having a serious head injury. The Red Bull driver went nose into the gravel with both drivers leaving the scene without a scratch.

The collision happened on lap 26 of 53 on the Italian circuit. After Hamilton left the pit lane, Verstappen drew up alongside him as they were both looking forward to a podium finish. Verstappen's car also went into the gravel trap at the side of the track with the back of his Red Bull, rested on Hamilton's car.

Daniel Ricciardo of McLaren won the race and his first victory since Monaco 2018 and his maiden podium for Mc Laren. His teammate Lando Norris also came in the second position. This is the first time McLaren is having their drivers finish in the first and second position since Canada 2010.