Ghanaian singer, Kidi is set to drop his second album, 'The Golden Boy' in two days. He has described the album as one that he "made with love". 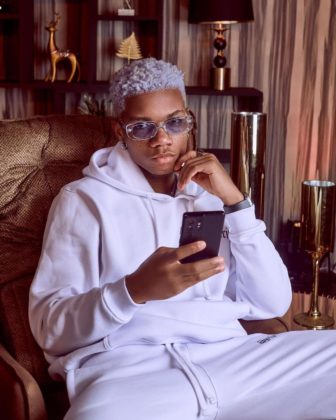 The singer shared this announcement via his Twitter page on Tuesday, the 22nd of June 2021. Kidi revealed that the 'The Golden Boy' album is scheduled to drop in two days. He also told fans that he knows he is not entitled to their support but pleaded for it nonetheless. Kidi also told fans to stream the album because it was made for them. He wrote;

I know you want to continue to see Gh Artistes Soar. I know you genuinely believe is us and wanna see us win. The Golden Boy album drops in 2 days. I know I'm not entitled to you support, but I would very much appreciate it. you know I can't do this alone.

I need you to support it like it belonged to you because honestly it does. Stream it. Play it. Share it. ENJOY IT. Use it left right centre. If you like koraaa Touch it. This Album was made with love. 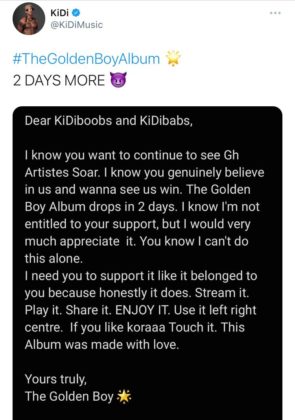 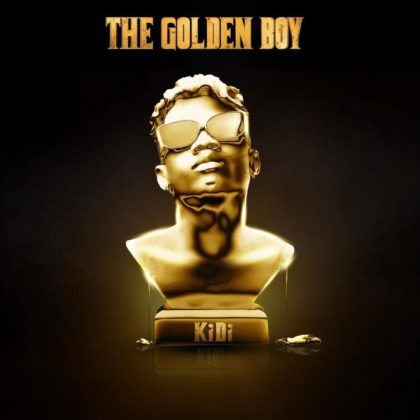 'The Golden Boy' will be Kidi's second studio album after he dropped the 'Sugar' album in 2019. The 'Sugar' album was a perfect entry for the singer when it arrived and had features from top acts like Stonebwoy, Peruzzi, Mayorkun, Mr Eazi, and more. 'The Golden Boy' album on the other hand sees Kidi steal the show more for himself, only featuring Joey B, Kuami Eugene, and Patoranking. The singer has also unveiled the artwork for the album, which is a photo of a dripping gold statue of him with his name etched just underneath.