Mavin Records singer, Johnny Drille held a listening party for his new Album which drops on Friday in Lagos, and everyone present was decked out in their pajamas.

Johnny Drille held the listening session for his new album somewhere in Lagos and he disclosed that it was a pajamas party. The party happened on Sunday, the 29th of August 2021. 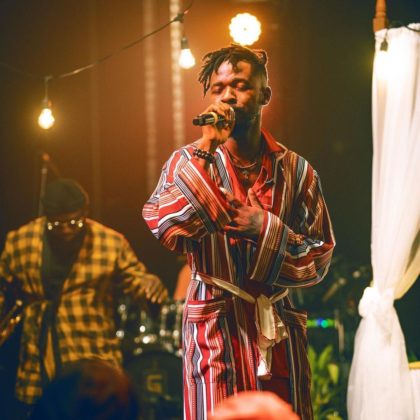 The singer shared photos from the listening party via his Instagram page, thanking everyone who worked on the project and even those who attended;

We held the exclusive pajamas themed #BeforeWeFallAsleep album listening yesterday night and it was so beautiful. Special thanks to my celebrity friends, my super fans who came, my Mavin family for all the love and push, my manager @massivematthew, Mr Tayo and Mrs Deola of @showgearonline 🧡, my day 1 supporter @oliveemodi, my special guest performer @ayrastarr, to my amazing band @wildkingsmen plus brozay @wilsonmuzic, guest musician @kwiteemusic for all the labor of love. God bless you all so much.

If you missed out on our exclusive album listening, not to worry we have something even more special happening on Thursday. Stay close. More info soon.

Johnny Drille also shared videos from his listening party in Lagos via his stories and one of those videos saw him performing those guests in his pajamas. They were all laid on beds around him.