Nigerian artsite and Grammy-winning singer, Burna Boy has gone on a fresh Twitter rant regarding his nationality and the two major musical fanbases in the Nigerian internet space. 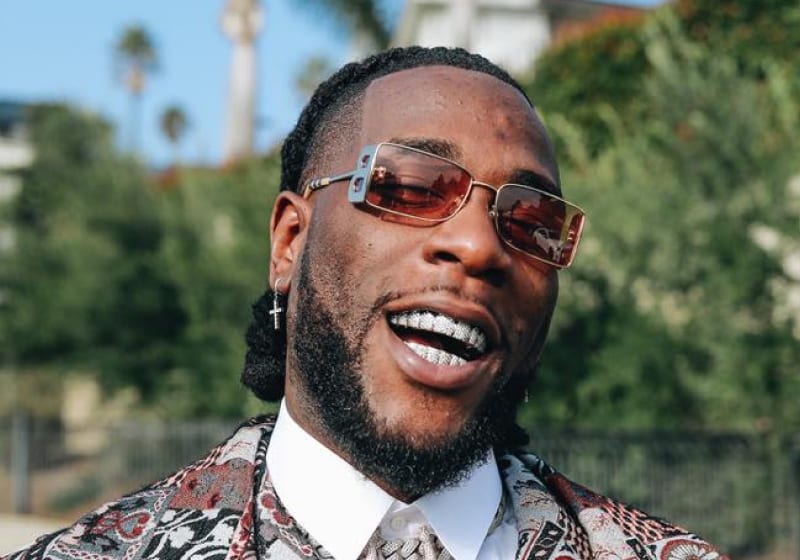 The artiste who is no stranger to Twitter rants had first set the ball rolling with a response to British musician, K*Ners who had given Burna Boy a shout-out for being talented and hardworking. This had attracted conflicting comments from other internet users who felt his rise was majorly due to his deal with Atlantic Records and not on account of his talent like counterparts, Wizkid and Davido. It was at the moment when K*Ners had asked contradictors whether Burna Boy shouldn’t have taken the international deal that Burna himself had stepped in. The megastar in his response took a swipe at fanbases who had been countering Burna Boy’s rise to fame in the comments and appeared to be the Wizkid FC as well as 30BG Gang. He said;

“Bro. Don’t get worked up. It’s Nigerian Twitter with 2 delusional fanbases, trust me You are not talking to actual people if their handles look like that” 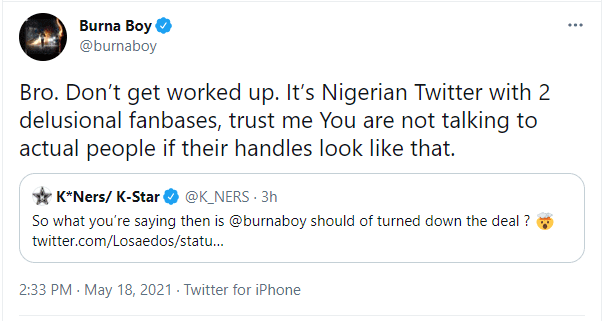 Soon after the self-titled African Giant stated that he was not a Nigerian artiste, going ahead to add that he doesn’t make his money from Nigeria but only comes to the country to enjoy himself.

This revelation had been made in response to a Twitter user who had jokingly mentioned that Burna Boy would soon leave Twitter NG space. The singer shed more light on his nationality saying;

“I’m from here and I live here because I love my home and my people, E no pass like that. I don’t make money from Nigeria. Na only cruise dey here.” 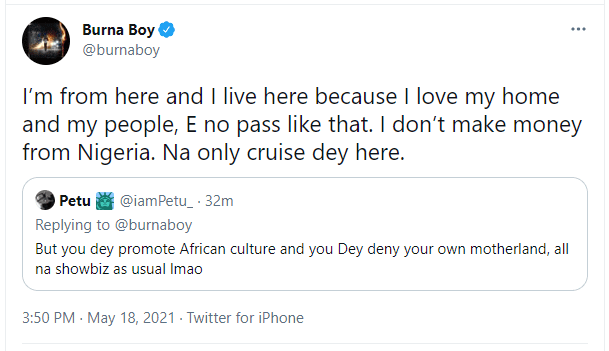 Following this declaration Burna Boy further clarified that he wasn't paid by the Rivers' State governor during his pomp-filled visit to his hometown. Burna Boy said;

“Lol. I didn’t get a dime. Only the artists who honoured me by performing at my homecoming were paid. Get your facts right.”

What do you think about Burna Boy's claims to not being a Nigerian artiste and do you agree with his description of Wizkid FC and the 30BG Gang?