Veteran American rapper, Busta Rhymes has revealed that he has a new collaboration with Nigerian superstar, Davido dropping soon.

Busta Rhymes shared a video of himself and Davido in the studio and told fans to watch out for their collaboration. The video was shared via Instagram on Friday, the 13th of August 2021. 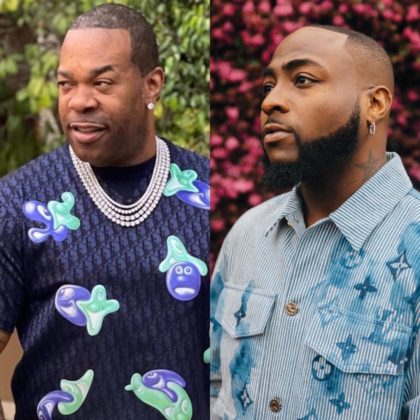 The two artists were seen in the studio and seemed pretty excited by the collaboration. Busta Rhymes described it as dangerous, while Davido said he was just happy to be there and they are about to show the fans some history with the new single. The rapper captioned the video;

In a recent video interview, Davido also reveals how he got to work with Busta Rhymes' compatriot and fellow rapper, Nas. Speaking to Power 106's DJ Carisma, Davido went into the process behind the making of his latest album. He revealed how he made the international collaborations on the project happen. Davido said he was on a recording camp with Hitboy when he met with Nas as they did the song there in one day. In his words;

Funny enough, I was just in the studio. He had a recording camp and I was in the studio. Then I was walking through the bathroom and saw Nas, so I walked up to him. He was like, Yo you Davido? Then Hitboy just hooked it up, and we did the record in one day. A lot of things on this album have happened naturally and I feel like when you're making music, that's something that really has to come to play.

Watch the Collaboration Announcement Below