BBNaija season 6 housemate, Queen has explained her relationship triangle with Pere, Boma, and WhiteMoney during this week's live show.

Ebuka specifically asked Queen what the situation is with Pere, Boma, and WhiteMoney during the BBNaija live show and she explained herself. This happened on Sunday, the 22nd of August 2021. 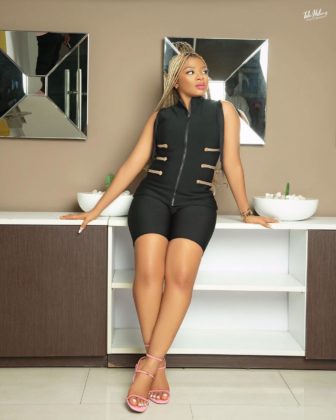 Queen told Ebuka that Pere was the first person she noticed when she got into the house, mainly for his broad shoulders. She said she also approached Boma when she arrived to help her create space to put her stuff, to which he duly obliged. Queen also remarked that she likes WhiteMoney because he's a nice guy and she has a thing for light-skinned men. In her words;

This is my truth, when I came into the house, the first person I really saw and had physical attraction for was Pere, because he's actually tall and broad. I met Boma as well. I went to him for space to keep my stuff and he actually made a reservation for me. Apparently, he's a nice guy and I enjoyed my conversation. Then WhiteMoney in the picture for me, I love lightskin guys.

Although Queen has been seen around Boma and Pere as she said in the live show, it's really WhiteMoney she has been cuddling in the BBNaija house. A video that emerged yesterday showed the two of them cuddled under the duvet.