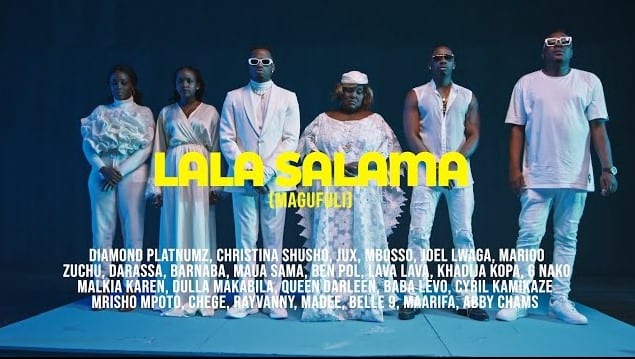 Tanzanian All Stars have come together to release the visuals to their tribute single titled “Lala Salama (Magufuli)”.

While Tanzania continues to mourn the passing of their President John Pombe Magufuli, various artists have come out to pay tribute to their late president.

This solemn track is filled with the grief and sadness to symbolize the pain that the various artists are filled with. Mbosso starts the track with a verse that speaks of the pain that Tanzanians are feeling after the loss of their beloved leader.

Jux sings about how Tanzanian citizens will remember his excellency.

Out of respect for the late president, the artists made it clear that they did not expect to be paid for their works on this track.

At the moment, this is one of the main songs being used to mourn Magufuli, a symbol of unity among the Tanzanian citizens.

This track is a joint production by Lizer Classic, S2kizzy, Abbah and Trone while Kenny, the official WCB director shot and chopped the official music video.