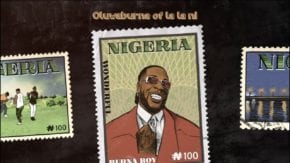 The African Giant returns with another aspirational banger, ahead of a July release for his forthcoming project Twice as Tall. Produced by Telz, "Wonderful" is all shades of versatility and brilliance.

Vado the Great, last Thursday, put out the much anticipated King of Love, and I'm definitely loving "Ada," a danceable tune spiced with an accessible love story.

Praiz ft. Kingxn – To The Moon

As titled so, this record is built on ethereal keys and percussions, Praiz's beautiful singing melding perfectly into the imaginative world. Feature Kingxn delivers a fluid rap verse to match the flair of the singer, bringing perfection to the record.

After fan favorite "Again," Wande Coal takes the tempo up with this record, which moves at the pace of a club banger, in tradition with "Iskaba." We'll dance to this as we await a project from the legend.

Having collaborated extensively, we've seen Masterkraft knows how to bring the best of Flavour and on "Equipment," a mid-tempo party starter, the Afro Highlife maestro sounds full of life over a throbbing Masterkraft beat.

Cryomatic is a Nigerian Christian EDM band fusing African sound with EDM. "Moment in the Sun," off the Transient EP, is a hopeful record, sunny as the poetic lyrics which accompany its production.

Off Ghanaian new wave rapper BRYAN THE MENSAH's 7-track NOT GOING OUTSIDE comes this hippy Trap record, which features a sweet hook and (as usual) a great verse from Cue.

Oga Network – Who Ask You

"Resist the urge to shalaye" is nowadays a social media enabled trend, and Oga Network's latest record sounds the sonic interpretation of that quip, with the artist speaking on "shalaying" through a series of prideful lines by such talkative characters.

Produced by Rexxie, Naira Marley's new song is a party starting record, with drums and keys which evoke an Owambe party.

With all that's going on, it's easy to lose sight on things that are going right. But veteran worship minister Chris Morgan has penned and recorded a glorious song of gratitude, one you should start the new week with.

In his first single after his groundbreaking debut Laughter, Tears and Goosebumps, Fireboy combines R&B and elements of Nigerian Pop, a la Wande Coal. It's a beautiful song, although it will alienate some; obviously an internationally driven single.

Our weekly roundup of Best New Music continues below

Off the deluxe edition of the eponymously titled Bisi Kuti comes this head-bumping jam, reserved for the sleekest moves. Both artists combine beautifully on this, infusing a classic Fuji vibe into the Afro pop production.

Drawing inspiration from the famed lovers of Yoruba mythology, Moelogo, off this standout from his Me EP, produces a beautiful love song decked in the vibrancy of traditional instruments and vocal delivery.

"Anymore" is an eclectic record, with leanings on R&B, Hip Hop and Pop, managing to find a suitable ground between all genres. A truly remarkable song from the remarkable Tsuni.

After a well-publicized search for this song's cover (which prompted thousands of brilliant designs), the song is out, and as brilliant as any Rema song. Proclaiming his uniqueness on the record, some listeners noticed a familiarity to its production –Jay-Z's classic, "Dead Presidents II," was of course sampled.

Tomilola's "Let Go" appraises the unpredictable quality of life, hence the need for a little more living. It's a beautiful song made even more so by the presence of The Cavemen, who infuse their soulful Highlife sound to the record.

Veteran Bayelsa-born musician Timaya has enjoyed an unproblematic time (quite worthy considering the times we're in), stacking his money and living the good life, and he wants you to know that on his latest record. That he was born to win although as he chronicled in its lyrics, he did get off to a tough start.

Wondamagik is a brilliant artist/producer. On "Zombie," he features frequent collaborator Ogranya, who brings the Soul to this banger of a track, replete with House influences. Off The Chronicles of Magic tape.

Two-man Boybreed, coming off their excellent performances on E Kelly's project, feature Minz, who himself was on that EP. "Julie" is a classic love tale spun around a mid-tempo Afro Pop beat which settles into a laid back vibe.

Sometime ago, the precociously talented WhoIsAkin released his FULL MOON WEEKENDS project, made of 5 tracks. "Energy" is the last song off the slim tape and perhaps the most rewarding, a lovely rendition delivered in the exciting songwriting of Akin's, whose music leans on a trio of Fuji, Nigerian Pop and R&B. Something dreamy about the keys too, but you get the idea.

Storytelling and a regal Highlife beat never fails, and not especially when the singers are the trio of Jaywon and Umu Ogbiligbo.

There it goes. This week's selection for Best New Music. Go listen and have blessed days ahead.