Fan Affairs with SDC: "SDC Fans Are Not Crazy, They're Not Mad"

Advertisements
In this edition of Fan Affairs, we speak to Nigeria's favourite rap music duo and conveners of the Palmwine Music Festival, SDC, fully known as Show Dem Camp, who recently released their latest album, Clone Wars Vol.5- The Algorhythm, to hear all about the fan love they enjoy from their loyal fanbase. 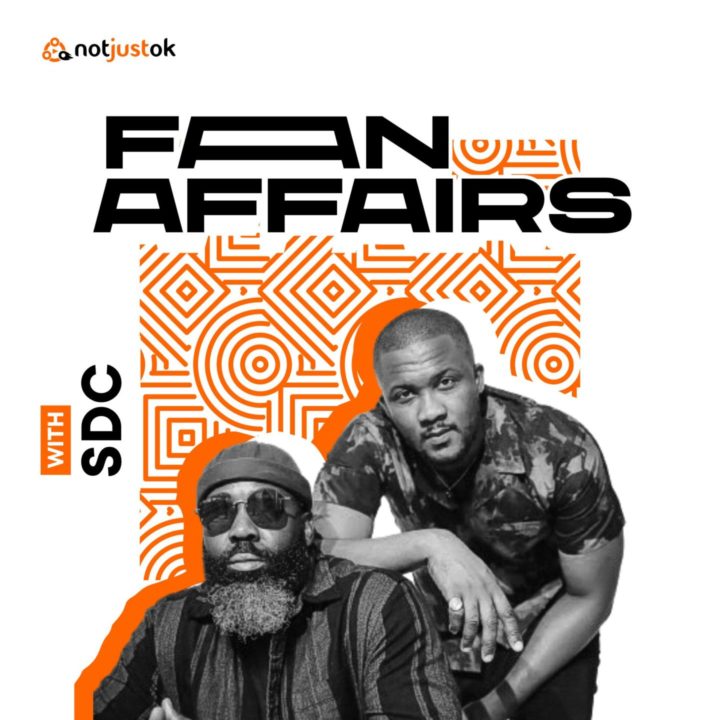 Fan Affairs with SDC: When did it first hit you that you had fans?

It first hit me that I had fans when we had a show at Benue and social media wasn't as popular as it is now. We went on a show with Lynxx and friends and we were performing the songs and people were rapping the songs back to us. And it was really baffling because then we didn't know how the music would potentially reach Benue. It was just really crazy. At that time we had a record called Farabale and they were singing and rapping every word and that's when it struck me that man maybe we're on to something.

ALSO READ: Fan Affairs with LadiPoe: "A Guy Sent Me a Picture of A Tattoo of My Lyrics on His Chest"

On one particular occasion, I was on the underground in London and two people at Victoria station were just looking at me. At first, I was like “What's up with these people, why are they gauging me anyhow?” But then, the guy sent, I think it was his girlfriend-- I assumed but it might not have been-- to ask if I was part of SDC. And she was like “Yeah.” And the guy just started running mad and he just started shouting like, “Yooo! Big fan!” And all that stuff.

I go anywhere I want to go, nothing really changed. As I said, SDC isn't exactly in-your-face. But I mean, I haven't been to Silver Fox in a long time, I guess I stopped doing that. (Ghost laughs) Other than that, I go everywhere.

Our style and approach to music have always been from a very real level, we never try to pretend that we're more than what we are, we never try to pretend that we have more than what we do. So we've always been very honest and very open and, I feel that way, it makes us relatable with fans. We go everywhere, the same places that we've always gone. A lot of times, fans come up and take pictures and I just feel that because of the type of people that we are, we've never put ourselves in a position or situation where people can't access or reach us. That's not Show Dem Camp.

Fan Affairs with SDC: What is the craziest or most memorable thing a fan has ever done to get your attention?

I think it was once when we'd done a show at Abuja and we were leaving the venue and the guy started chasing the car.

It was super early in our career and we kinda just hailed him from our window. And I think once he got that hailing or confirmation, he stopped chasing.

ALSO READ: Fan Affairs with Tomi Thomas: "I kissed My Fan Back"

You know, I think Abuja fans are special because I haven't really seen that in Lagos before.

I don't think I have crazy fans, as in ‘bang, bang.’ SDC fans are not crazy, they're not mad. They're sensible human beings, I think our fans have sense. I mean at our last show in 2019, there was a lady that flew in or something. Cause when she heard our songs and she liked my voice, she said she had to meet me. Said she flew in just to meet guys. It could have been a scam, it could have been coming from Osapa London but that's what she told me sha!. And I thought, ‘That's kind of crazy for you to fly all the way for a guy's vocal tones, crazy.’

Fan Affairs with SDC: If you were going to have a fan moment, what celebrity do you think would leave you starstruck?

A long time ago, I saw Jay Z outside of a club in London and I froze. But I think if I saw him today, I don't think I'll freeze, I'll definitely try and absorb some game out of him. But if I had to take out Jay, probably Michael Jordan cause he was one of my childhood heroes. I think I'll flip if I saw him. I'd have said probably Erykah Badu but we follow each other now on Twitter so we're like best friends now so she doesn't count.

The celebrity that would have me starstruck-- funny enough they've done an album together, I think that'll be Nas or Damian Marley. I don't think I'd be starstruck but I want to just have an opportunity to just kick it with them, have conversations cause I follow their works so deeply, I feel like I have an insight into their thought patterns and certain things they might have had in those moments. And I think it would be amazing to know the mind frame they were at or what stage in life before they released certain records and certain things they said in some of their records. SoI don't really think it's starstruck. But those would be the artistes that I really want to sit down, and break bread and chat with these people. It wouldn't just be about ‘Hey, I'm a fan.’ And probably Chronixx as well.

Were you surprised to have gotten the cult following SDC has have given your low-key branding?

You know, so for us, it's been ‘this is our fanbase, so how do we grow this fanbase?’ And the fanbase has increased over time to the point where we have festivals and they're fully sold out and fully packed because we feed our fans and we continue to grow our fans. And maybe new people are converted into fans which is different from some artistes who have a million followers but aren't really emotionally connected with them.

We make music in hopes that people feel what we're trying to express, so the intention was always to reach as many people as we possibly can. And we believed in ourselves, so I don't think ‘surprised’ is the word I’d use, but if we have to use it, yes I was pleasantly surprised that we have the cult following we do although, we put in work.

Fan Affairs with SDC: What's your most memorable edition of Palmwine Music Fest and when will the next one be coming up?

The first one was special, it was at that moment we realized we'd touched a lot of different kinds of people and the realization that the grind and hard work pays off to some levels, you know, fighting the good fight.

The next one will be coming in as soon as we're able to perform outdoors. As soon as the covid bans and restrictions are reduced. We're planning towards October and December so God willing.

It was the first festival and the reason is because we'd never done a festival before, we weren't sure what was going to happen. I remember when we were in the planning stages of the festival, and we said ‘How many people were we planning for? We said maybe between 500 people to 800. And for me, I remember on the day, we'd been there to help set up stage, do soundcheck and then everybody said guys rest, go home, you have a show, you have to perform tonight so just take some time to rest, and get in your zone.

When I went home, I fell asleep so when I woke up, I called people and asked “Can I start coming?” And they said, “Yes, start coming.” I said, “What's the crowd like?” They said, “Just come.” I thought in my mind “Oh my God, this thing may be a flop” Then something also in my mind said, “Well maybe they're not telling me cause there might be some type of surprise.”

And I got there and for us that had estimated 500 people, that night there were 2,500 people there. It really touched me and actually really moved me cause that seemed like a validation of everything we'd been doing till that point, and the decision we'd made and the career path we'd chosen. It was also the first time that my mother had actually seen me perform. So that was equally special for me.

The next Palmwine Music Festival in Lagos will be in December 2021, Lord willing. And I say that because we don't know what the restrictions will be then, we don't know what world we'll meet in 2021 December because everything keeps changing. So one world seems like we're going back to normal, another month seems like we're going back to lockdown. So my prayer and hope is that we'll be in a great place, the world will be in a great place and hopefully, we're able to do another Palmwine Festival, December 2021.

If you enjoyed Fan Affairs with SDC, make sure to check Notjustok.com every Tuesday, as we'll be sure to bring you more authentic stories from all your favorite music stars.