OFFICIAL: Arsenal Confirm Granit Xhaka Will Be out for Three Months

Arsenal Football Club have confirmed that Granit Xhaka will be out of football action for the rest of the year. The player was substituted during the game against Tottenham at the Emirates Stadium on Sunday, September 26th, 2021. 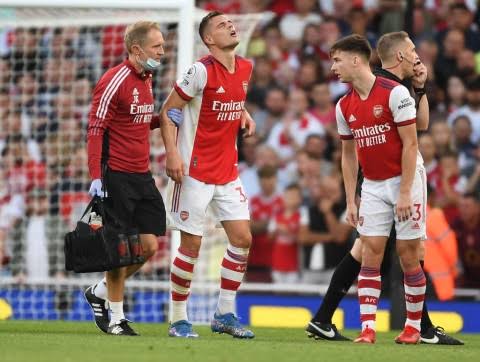 Arsenal confirmed the injury news on its website on Wednesday, September 29th, 2021. According to the report, the player suffered an injury on his right knee ligament.

Xhaka is expected to be out of the game for at least three months after consultation with a specialist in London.

Further to injuring his right knee during Sunday’s match against Tottenham Hotspur, assessments and scans have confirmed that Granit Xhaka suffered a significant injury to his knee ligament.

A specialist consultation took place in London on Tuesday evening, which has determined that Granit does not require surgery. Granit’s recovery and rehabilitation programme will start immediately and we are aiming for him to get back in action in approximately three months.

Everyone at the club will now be supporting and working hard with Granit to get him back on the pitch as soon as possible.

The Swiss player got injured when he was caught by Lucas Moura, who was falling off from a tackle by Thomas Partey. Arsenal fans will hope his absence will not be missed by the team on the pitch.