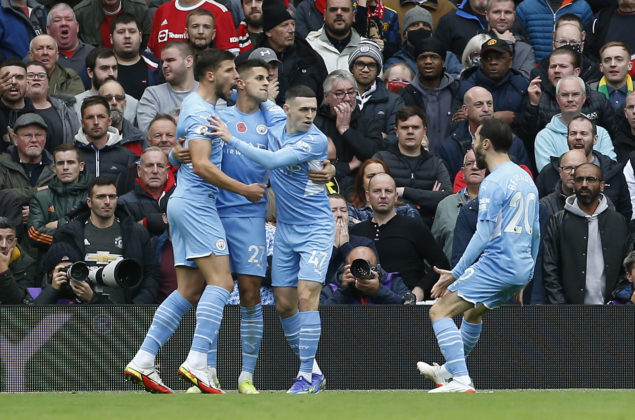 Manchester City took the lead on the seventh minute, courtesy of an own goal from Eric Bailly after he failed to deal properly with a low cross from Cancelo. City continued to dominate the game as United found it difficult to break through from their own half. Manchester United's first chance went to Ronaldo, but the Portuguese half volley could not beat Ederson in goal.

Guardiola's men almost extended their lead in the 28th minute when Gabriel Jesus was through on goal, but David de Gea saved his effort off the line. The Spaniard also made saves to deny De Bruyne and an own goal from Lindelof. City extended their lead at the stroke of halftime, with a goal from Bernardo Silva, who connected to a pass from Cancelo. The first half ended 2-0.

The second half started the same way the first half ended with the dominant play coming from the away team. City had the first obvious chance of the half as the ball finds Gundogan, but a poor touch let him down and he could only find the side net.

Another sad news for United fans was a head injury to Luke Shaw, who collided with Rúben Dias. The Englishman was substituted in the 72nd minute. John Stones almost got the third goal of the day from a City corner, but his effort was wide of the post. The game ends 2-0 in favor of Manchester City.