Lewandowski Nabs European Golden Shoe, Says He Doesn’t Have To Prove Himself In Another League

Bayern Munich’s prolific goal-poacher Robert Lewandowski has stated that he does not have to prove himself elsewhere after winning the 2021 European Golden Shoe. 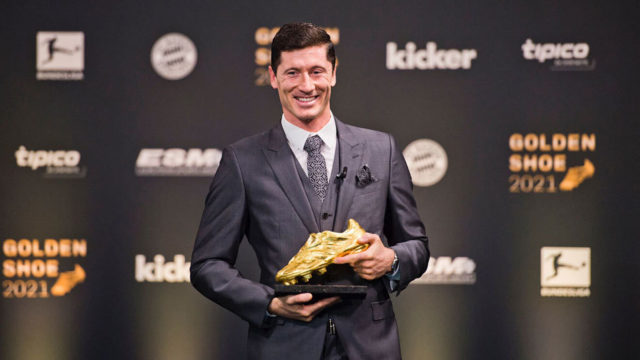 Bayern Munich’s lethal goal scorer Robert Lewandowski has won the 2021 European Golden Shoe ahead of goal maestros Lionel Messi and Cristiano Ronaldo, and he has also made it clear that he doesn’t have to prove himself elsewhere after winning the deserved award on Tuesday.

The polish goal-machine scored a total of 41 goals in 29 Bundesliga appearances for Bayern Munich last season and was presented with the 2021 European Golden Shoe on Tuesday at the ceremony held at Bayern’s Allianz Arena, marking his achievement as Europe’s top goal scorer for the 2020/21 season.

Speaking at the event, Lewandowski made it clear that he doesn’t have to prove himself in another league, further giving defenders a stern warning that his age doesn’t mater as he would continue to aim at giving his best.

Lewandowski is the second player in the history of the Bundesliga to win the award after Mueller, who won in 1970 and 1972.