The Ultimate Fighting Championship (UFC) Welterweight Champion Kamaru Usman is popularly referred to as the Nigerian nightmare made a lot of revelations in his interview with Ebuka Obi Uchendu on the Black Box Interview. 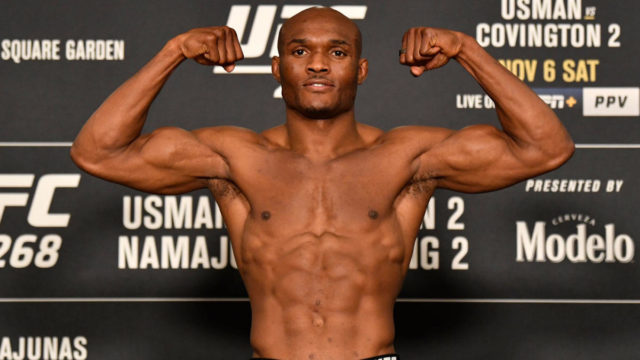 (1) He left Nigeria at the age of Eight:

The UFC fighter confirmed that he and his family left Nigeria when he was at the age of eight. This was the first time his family was together again after his father had left them in Nigeria for almost four years to seek greener pasture in America.

Kamaru was always interested in American football when he was in high school, but his stature was a major disadvantage for him to pursue his career in sports. A coach in his school was the first person to introduce him to wrestling.

He started training for a call-up at the Olympics for the freestyle wrestling at the games but he was also training people for fights during this period which earned these people a lot of money. He was not really disappointed about missing the games in London, but this was a decision that made him switch from wrestling into mixed martial art.

(4) His greatest regret in his career was his only loss.

The Nigerian nightmare confirmed his only regret since he started fighting in the UFC was his second professional fight, which happened to be his only defeat since he began fighting. Usman said the defeat to José Cáceres taught him not to give up because he gave up in that fight.

(5) He does not enjoy fighting:

He also revealed in the interview that he does not enjoy fighting. He said the only thing that pushes him to work hard and get into the ring is the competition. Usman, who twenty-one professional fights under his belt, revealed that whenever it is time to get into the ring, he flips the fighting switch inside of him.