It was the biggest game of the weekend as Arsenal hosted Chelsea in their first Premier League home game of the season. The Gunners went into the game off the defeat to Brentford on the opening game of the season. It was a second debut for new signing Romelu Lukaku, who was signed by the Blues from Inter Milan for 97.5 million pounds. 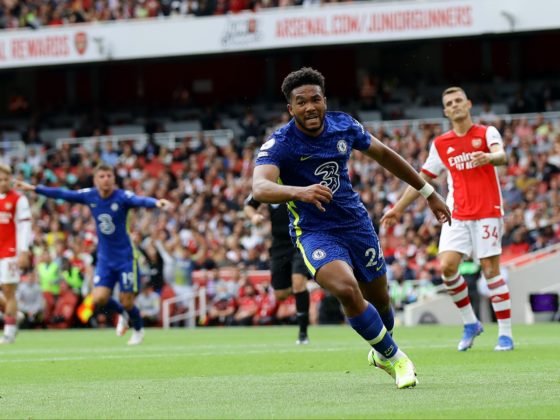 The game started with Chelsea dominating the game and looking more like the first team to score the goal. It was the away fans who got the first shout of goal on the 15th minute as Lukaku scored the game's opening goal. It was a beautiful connection from the Belgian, who got to the end of a pass from Reece James.

The Blues had another chance to extend their lead before the 30th minute as Havertz's cross-field pass finds James and he had Lukaku who was bursting into the penalty area, but the ball rather went to Mount whose shot was blocked.

Reece James extended the lead for the Blues on the 35th minute as Marcos Alonso plays a pass infield to Kai Havertz, who sends the ball over to James, who has time to take a shot and get the ball past Leno.

Arsenal had a shout for a penalty on the 40th minute when James and Saka were in a tangle, but VAR saw nothing wrong in the England defender tackle. Chelsea went into the break with a two-goal advantage at the Emirates.

The second half started with Arsenal showing more determination to get back into the game. The pressure created a chance for Bukayo Saka, whose effort was deflected off Alonso and tipped over the bar by Mendy. It was a home debut for Nuno Taraves after he came in for injured Kieran Tierney in the 65th minute.

The game saw the introduction of Balogun and Aubameyang for Arsenal, while Thomas Tuchel introduced Kante for the Blues. It was almost a third goal for Chelsea when Leno saved a header from Lukaku.

The game ended 2-0 in favor of Chelsea at the expense of Arsenal. This is the first time in history that Arsenal will not score in their opening two games of the season.