Nigerian singer, Tems performed to a sold-out crowd at the Roxy Theatre in West Hollywood, and we have the videos from the event for you.

Even though the show was held on a Monday, Tems still pulled a sold-out venue in West Hollywood and the videos serve to confirm this. The videos were shared via Instagram on Tuesday, the 5th of October 2021. 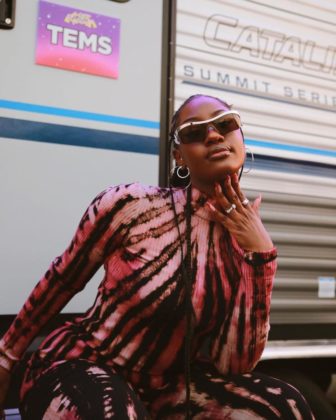 On Sunday night, Tems showed up to perform with Wizkid at his own sold-out day 2 LA concert which held at the NOVO event space. After the show, the duo were presented with a platinum plaque for their hit collaboration.

READ ALSO: Wizkid and Tems Receive Platinum Plaque for ‘Essence’ in the US | WATCH

Barely a day after showing up for Wizkid’s concert, the favor was returned as the videos also show Big Wiz performing at Tems’ sold out West Hollywood concert. Other notable guests present at the concert to show their support for Tems include Elsa Majimbo, Oxlade, DJ Tunez, Meji Alabi, and Bizzle Osikoya.

Tems has a growing fanbase which stems from the huge impact her songs have made in recent times. From her Essence collab with Wizkid going global to her featuring on Drake‘s recent album, the singer has become quite the sensation and it’s not surprising to see her commanding a sold-out show.