Mavin Records singer, Johnny Drille is set to drop his debut album, Before We Fall Asleep, and is paying a visit to mentors like Jon Bellion to preview it for them.

Johnny Drille shared a video of himself in the studio playing his debut album for the legendary Jon Bellion. The singer shared the video via his Instagram page on Saturday, the 21st of August 2021. 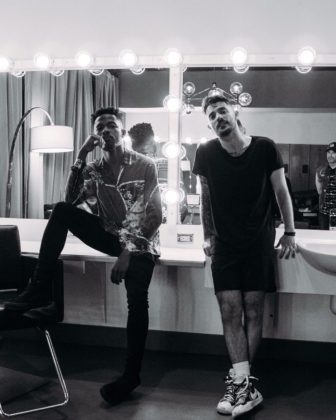 Johnny Drille and Jon Bellion in 2019

Johnny Drille has made no secrets of the fact that Jon Bellion is his idol, and it was a great day when he got to meet the man back in 2019. Since then, the two of them have developed a good friendship, hence why Johnny Drille sought out his idol to preview his album. The Mavin singer wrote as caption along with the video;

Played the #BeforeWeFallAsleep for @jonbellion. There’s so much more great things to come. The future is so bright it’s blinding.

Asides from Jon Bellion, Johnny Drille has also previewed his debut album for Cobhams Asuquo, and Basketmouth. Announcing his album earlier this month, the singer wrote shared a teaser video for his album via his Instagram page and also said how excited he was to finally be releasing the project to his fans.

Johnny Drille said one part of him hopes they'll be ready while the other part knows they're definitely not ready. He says;

My album is out this September.
I’m waited forever to be able to share this piece of me with you and I’m ready.
A part of me is hoping that you are but the other knows you’re not ready for what’s coming.
This is going to be THE album, OUR album. I promise you that.
Johnny, JD