Nigerian superstar. Burna Boy was present at the Formula One US Grand Prix race that took place at the Circuit of the Americas today and we have the videos for you.

Burna Boy attended the US Grand Prix along with stars like Serena Williams and Shaquille O'Neal as the videos show him in support of Mercedes driver, Lewis Hamilton. The videos were shared via Instagram on Sunday, the 24th of October 2021. 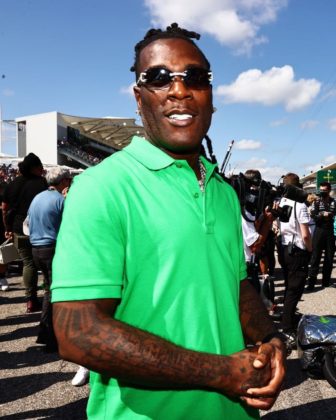 The US Grand Prix is one of the races from the Formula One season and this year's edition was won by Red Bull's Max Verstappen. Lewis Hamilton of Mercedes came second, while another Red Bull driver, Sergio Perez rounded up the top three.

In the videos shared, Burna Boy was present at the US Grand Prix today in support of his good friend, Lewis Hamilton. The driver who is signed to Mercedes came in second in today's race. At the event, Burna Boy got to meet other celebrities who were also present like Tennis star, Serena Williams and Basketball star, Shaquille O'Neal. Other celebs present at the race include Ben Stiller and Sung Kang.