Nigerian singer, Bella Shmurda has apologized to the veteran comedian, Seyi Law for missing his show in Ekiti yesterday. He cited a misunderstanding as to the main factor behind this. 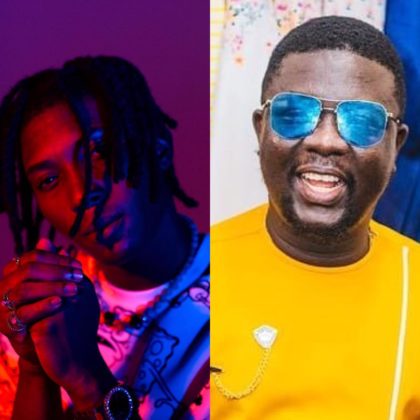 Seyi Law has booked Bella Shmurda to perform at his show in Ekiti on Sunday, the 20th of June 2021. However, the singer claimed not to be aware of the arrangement, and his label issued a disclaimer. Seyi Law responded to the disclaimer by posting the photo of the person who was paid for the appearance. He wrote;

Prior to the disclaimer released by Bella Shmurda, I had paid Yemi-Oyedele Tobi whose picture appears here part-payment for Bella Shmurda to perform at my show on the 20th of June at Ado-Ekiti and now, Bella's management has refused to recognize the payment made before their disclaimer and even rejected plea to accept a new negotiation. I am officially putting this out here before I involve the necessary authority. Thanks. The show is loaded, we just wanted a bit extra excitement, notwithstanding the show goes on. 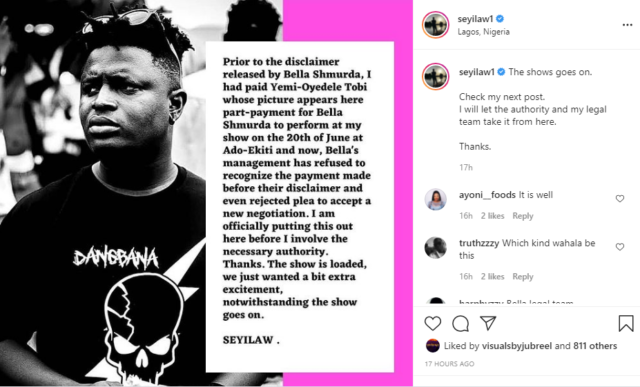 The singer shared this apology via his Twitter fan page on Monday, the 21st of June 2021. Bella Shmurda stated that he respected Seyi Law as a veteran in the industry and would never disrespect his hard work or work ethic. He also went on the explain that the comedian's team booked him through someone who no longer works for him, The singer also appreciated Ali Baba and ID Cabasa for trying to settle the issue. He wrote;

Before I proceed to setting facts straight, I want to sincerely apologize to my Egbon Seyilaw. I greatly respect him, his work and his brand and will not intentionally disregard him. I hope we can settle this amicably and go back to doing amazing work as Entertainers together.

It is popular knowledge that I am currently working on a project and stopped taking show bookings for mid-June till the release date of my project as I already had some commitments for these dates and needed to focus the remaining time on my project. As these plans were already made for these dates long before now, and Egbon’s show was only brought to my attention a week ago, there was little within my power that I could do to honor his commitment, despite the efforts of my team and I. I also want to restate- like I did some time back in March- that Seun Orekoya pka Pumping Sneh (@pumpingsneh) should be contacted for any bookings.

I never at any time held Jiggy out as the person to receive payment or take bookings on my behalf and this continues to be so. Once again, I apologize for any inconvenience this may have caused to egbon Seyilaw.

I also want to thank my Egbons @ALIBABAGCFR and @Real_Idcabasa for trying to help resolve this issue.
Thank you, Sirs.
Love always,
Bella Shmurda. 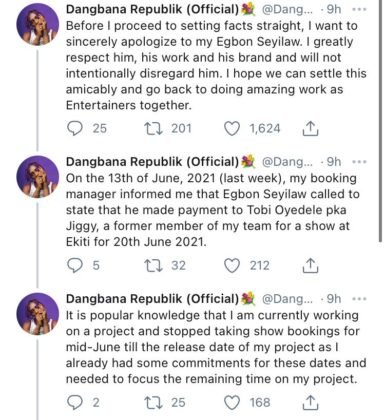 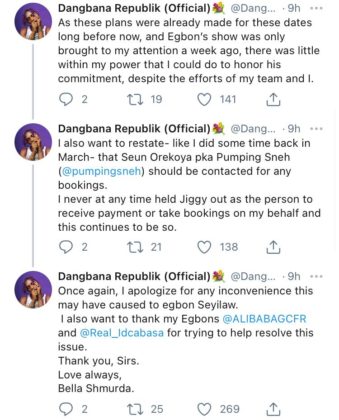