Arsenal's manager, Mikel Arteta, has given an update on the future of Eddie Nketiah, at the club. The player was on the score sheet for Arsenal in their 2-0 win over Leeds United in the Carabao Cup on Tuesday, October 26th, 2021. 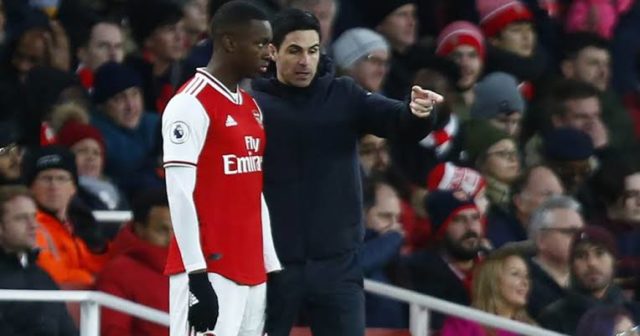 Mirror Football confirmed the news on its website on Wednesday, October 27th, 2021. Arteta, who was speaking in a press conference after the game, said Nketiah is a great player and he hopes he gets to stay at the Emirates.

The 22-year-old was on loan with Leeds United but it was not an experience that the player found interesting.

We had a situation in the summer, and there are still issues to resolve. But I have a belief that Eddie is going to be a top player, hopefully for Arsenal. I'm happy to have him in the team, I'm highly and from my side; I want him to do not doubt what he can offer. Whatever you throw at him more wants more, he demands more from himself. Another one I'm delighted to see the performance from that he had to score the goal and help the team be deserved it.

He's got a lot of players as well that they play in that position and he's got a personal situation, but I try to leave that aside and try to give him what he deserves.

Nketiah saw his loan move to Crystal Palace, collapsed collapse during the summer after the Gunners stopped the move from seeing the light of day. remains remain unclear if the player will extend his contract at Arsenal.