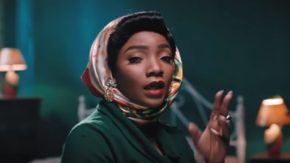 Simi on the set of ‘Selense’

Nigerian music star Simi has signed to Platoon. The “Selense” artist has been quiet on the music front since giving birth but she broke that silence with promise of new music while announcing a deal with the UK based entertainment company Platoon.

According to her tweet, the forthcoming EP will be titled Restless II. It’s been mentioned in the past by hubby Adekunle Gold who said he couldn’t wait for the world to hear what she had stashed.

If you’re wondering how Platoon comes in, here: they are a subsidiary of Apple Music, “offering advances, distribution and support to 88 African musicians — and quietly becoming a major player amid an industry wide shift toward establishing a larger footprint on the continent,” according to CEO Denzyl Feigelson.

Feigelson sees Platoon’s work as about creating self-sufficiency for artists in the region. “I want artists to be able to manage their music on our platform; get services like health care, legal and accounting; learn about publishing, touring, how you market; and conquer things like YouTube, Facebook, TikTok, Twitch,” he said to Billboard.

Simi joins Nigerian acts like WurlD and Cuppy on Platoon.