Nigerian singer, Mayorkun was present at the President's son, Yusuf Buhari's wedding last night and thrilled fans with a performance of hit songs.

Mayorkun hit the stage for Yusuf Buhari's wedding in Kano state, performing songs like Mama and The Best. The wedding was held on Friday, the 20th of August 2021. 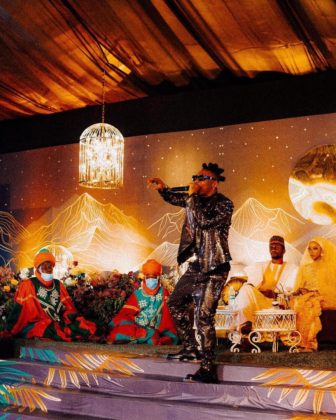 The official Mayorkun fan page @themayoroflagos shared a video of his performance, from him taking photos with the guests at the wedding to singing his songs. They wrote;

New Music #LetMeKnow out now on all platforms

The guests at Yusuf Buhari's wedding definitely looked thrilled by Mayorkun's performance of his hit songs. The wedding was the talk of the northern part and widely, the entire country. The singer who recently dropped a new single, Let Me Know also dropped photos of himself during his time in Kano.