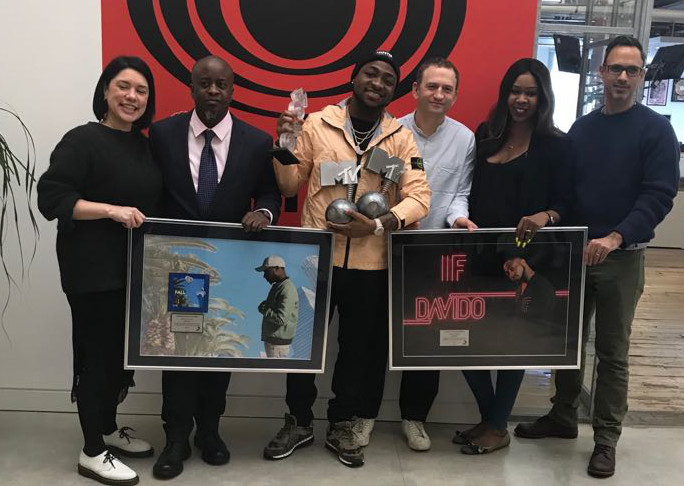 A little over 2 Years ago, Davido signed a record deal with Sony music with the ultimate intention to get his music serviced, distributed and marketed at a world-class level and the sentiments from many naysayers at the time were that it would be a waste of time. Today, we are witnessing the first evidence of what happens when your music is serviced effectively by a machine like Sony.

Remember when Davido told us 2018 will be greater than 2017, there was certainly no joke in the statement as the Omo Baba Olowo crooner is not just cashing in and signing ambassadorial deals, he has also just acquired some international prized possession which was announced few minutes ago on Twitter.

According to his tweets, his hit songs of 2017, IF and Fall have won great prizes for their sales, with Fall officially becoming Platinum and IF officially Diamond. This good news was also accompanied with his MTVbase and MOBO awards which he won for Best African Act and Best Worldwide Act in 2017.

Davido is highly ecstatic all he is doing is thanking God and appreciating his fans for taking him this far in his music career.

The Plaques were presented at the Columbia Records UK office and Efe Ogbeni who executed the record deal for Davido with Sony was present along with Managing Directors  and President of Columbia UK Stacey Tang, Manish Arora and Ferdy Unger-Hamilton. Vanessa Amadi (Management) and Michael Ugwu were also present during the presentation of the Plaques.

This is another huge win for Davido after selling out his Brixton O2 LIVE show a few days ago. Africa to the world!!!

‘IF’ Is officially Diamond and ‘FALL’ is officially Platinum in sales!!! My ? finallly came in as well! GOD IS REAL!! ???! Thank you Guys for making this happen!! ❤️? just gettin started!!! Bless to my team @efe_one @asaasika @missamadi ⚡️ pic.twitter.com/hTZn9jsxHZ