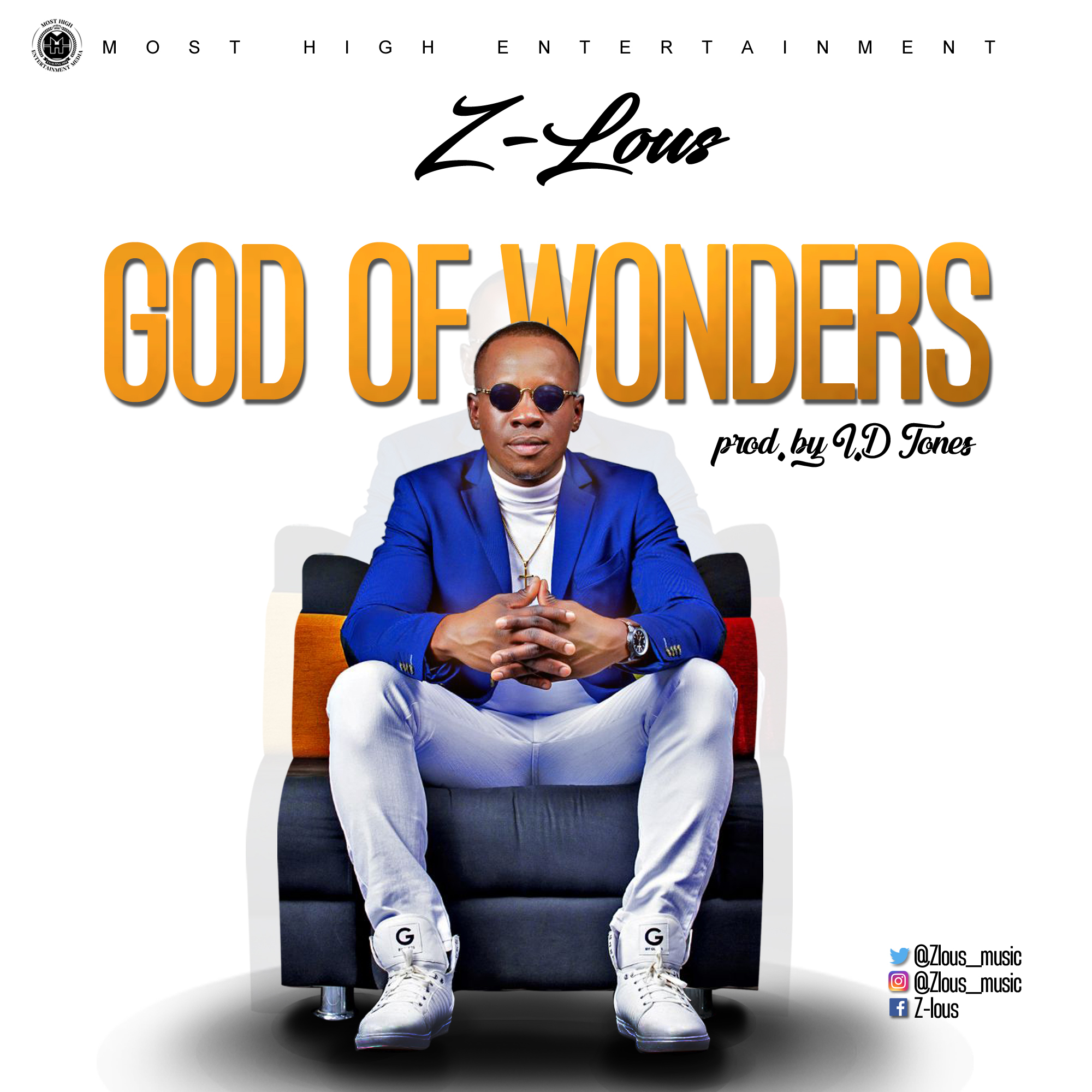 The beat gets you moving, the guitar chords make you want to go on an Odyssey, the chorus flows through your central nervous system and before you know it; you are on your feet outdoing King David with steps that are unprecedented, all to the GOD OF WONDERS.

On the very first day of creation God, through creation exhibited his wondrous quality by making everything out of nothing with HIS WORD. This wonderful aspect of HIM which everyone look forward to everyday becomes the focal point of this groovy masterpiece by Z-LOUS; characterised by an "easy to sing" chorus of English & Yorùbá (southwestern Nigeria) languages.

We can extol the virtue of our GOD OF WONDERS while dancing with excitement and this has been established by Z-LOUS' dexterous delivery and I.D TONES' detailed production in spite of the "street" feel.
I bet you can never have enough of this single from the ever creative MOST HIGH Entertainment. HE is indeed the GOD OF WONDERS. Enjoy and Share ! ! !

BIO
It has always been the message being expressed through the greatest medium, music and his zeal for top notch excellent delivery has never waned one bit till now.

Right from the age of 7 when he picked up the mic at his local assembly in Nigeria till now that he leads God's people in praises & worship of the Most High God at the Winners Chapel International New York, USA; Ikemefuna P. Nwabueze a.k.a Z-LOUS has focused on projecting the greatest message with great music.

His God given talent has evolved over the years via the influence of Gospel music greats like Kirk Franklin, Chris Tomlin, Panam Percy Paul, Canton Jones, Isreal Houghton, etc; consistent ministrations on & off stage; active participation in conferences globally; an outright & deliberate resolve not to be constrained by genre and tremendous exploits with his independent record label, Most High Entertainment Records where he is the CEO.

"Going Higher", his debut album - which took the Gospel music world by storm - was released in 2013 followed by his captivating sophomore "Blessed Child" & both were chart bursters. Of remarkable note is the traditional highlife hit track "Endless Love", the soul stirring hit "Behold the Lamb", and the smashing Album titled track 'Blessed Child" which people have clamoured to hear him sing wherever he ministers in songs.

Z-Lous is definitely not resting on his oars when it comes to the kingdom business as he is putting finishing touches to several singles that will be released as a brand new album in the course of the year. This will showcase the artistry of God's excellence with regards to innovative blend of vintage & new sounds of Hip Hop, Praise, Worship & Dance music.

Find out much more about Z-Lous on the major online music platforms such as iTunes, Apple music, Google Play, CDBaby, spotify, Amazon music etc. While you Watch out for updates by following and liking Z-LOUS' profiles on all social media platforms: Instagram, Facebook, Twitter, etc.