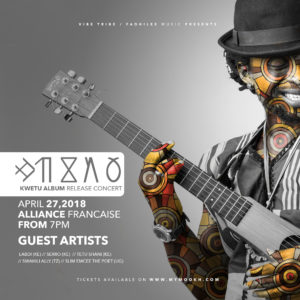 One of Kenya’s most authentic world music artistes - Fadhilee Itulya is set to launch his debut album: KWETU set to drop today (27th April 2018) at the Alliance Francaise, Nairobi. He will be showcasing a live performance of his upcoming 10 –track album which will include the singles: “We Don't Know”, “Kwetu”, “Shombo”, “Mama”, “Freedom” and “Flora”, among others.

Some of East Africa’s top live performers: Serro, Labdi Ommes and Tetu Shani from Kenya, Slim Emcee the Poet from Uganda, and Tanzanian artiste Swahili Ally will be also performing at the album launch.

He recently launched the video for the single "Freedom" off the new album. Watch:

Influenced by the traditional music of his home in the Luhya region, KWETU has a touch and twist of the “Omutibo” - an old style of Kenyan guitar music played using the thumb and index fingers on the right hand. A few bonus tracks will also feature the percussive original Luyha Isukuti tunes for the listeners to experience a journey of discovering old local nuggets incorporated into his music. He also fuses sounds and chants from across the African continent as well as global conventional styles of music including World & EDM music on the first release off the album - “Freedom”.

Fadhilee is daringly different with a unique sound, which has managed to capture music fans across the globe. His artistry is composed of his reliance on collaboration with fellow artistes in efforts to produce innovative sounds, and promote knowledge development in the field of Africa’s robust Arts and Culture.

On 30th April, Fadhilee will embark on a Kenyan media tour to promote his new album. Congrats on the album!