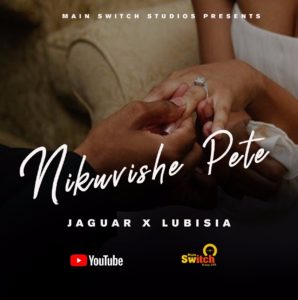 Celebrated Kenyan artiste Jaguar through Mainswitch Studios, has released a joint track "Nikuvishe Pete" with Lubisia - a young emerging act who he met on the campaign trail during the 2017 election period. Swahili for 'Put a ring on your finger’, the song is a captivating serenade for all the ladies who aspire to get engaged or tie the knot.

Directed by Thome, the video was shot in South Africa. Clad in dashiki and African inspired outfits, the video captures the song’s essence and theme against a beautiful backdrop of a stately home complete with a scenic view.

Speaking on the collaboration Jaguar says, “I am very excited to work with such an exceptional and talented artist like Lubisia. This is a jam for all the ladies in love and I hope all our fans love it,” adding “Kenyans should definitely keep their eyes on Lubisia, he has so much to offer and there are more upcoming projects.”

Jaguar remains at the forefront, as one of the established artists supporting young and talented upcoming acts in the region. He collaborated with Lubisia on this new single as a way to say thank you for composing a song for his campaign during the election period. Lubisia and Jaguar first met during the campaign trail in the 2017 elections as he was venturing into elective politics. Lubisia wrote a captivating campaign song that saw him perform in a number of political rallies – an election Jaguar would later win.