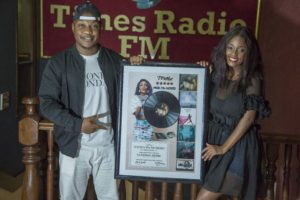 One week after the release of her debut album "Money Mondays", Tanzanian pop diva Vanessa Mdee becomes the first Tanzanian artiste to be awarded with a music plaque by leading media house Times FM (The Playlist) hosted by top media personality Lil Ommy. She receives this award after been named the Best Female Act, Best Live Act, Best Performer and Emerging Artiste of the Year by Times FM. She was awarded during an album review session at the radio station.