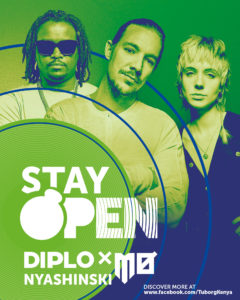 Originally written by Diplo and MØ, the original track was produced By Diplo. Nyashinski gives the track a Kenyan twist on the remix which was re-produced by Eric Musyoka of Decimal Records.

The lyric video is out on YouTube, brought to life by Imagine-Nation and Occular Productions.

Nyashinski is also among this year’s nominees for Best African Act at the MTV EMAs for the second time and is the only artiste repping East Africa. Voting is now open MTV