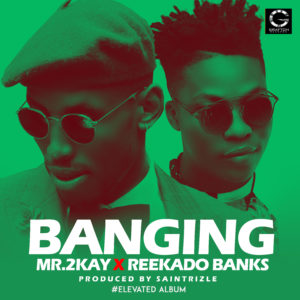 With a career only spanning across five years, Nigeria’s award-wining artiste Mr. 2Kay releases “Banging” – a new single featuring Mavins Records artiste Reekado Banks. Renowned for hit songs including “Bad Girl Special”, “Pray for Me”, and “Belema”, Mr. 2Kay has announced plans to release a new album already titled ‘ELEVATED’. The mid- tempo track produced by Saintlizzle will feature in the album, set for release in 2018.

Mr. 2Kay has plans to promote his album in East Africa as soon as it drops and will be coming to Nairobi for the start of his East African tour.

Mr. Kay says of his first East African release: “Banging is the perfect song to introduce me to my East African fan base as it represents all my sounds as an urban contemporary artiste,” adding, “I am equally excited to launch my brand in East Africa. Can’t wait to share more of the content I’ve been working hard to create. I want to connect with my fans so East Africa, expect to see me soon!”

Mr 2kay has scored several hits and collaborations with top Nigerian stars including Flavour, Iyanya, Timaya, Chindima, Patoranking, Doray, Idahams, Cynthia Morgan and Seyi Shay. He asserts that his visit to East Africa will present him with his first time opportunity to work with an East African acts.

In “Banging” – the bona fide feel-good track, Mr. 2Kay and Reekado brought their best in the studio and the result was an incomparable synergy set to unite music fans from West to East Africa.